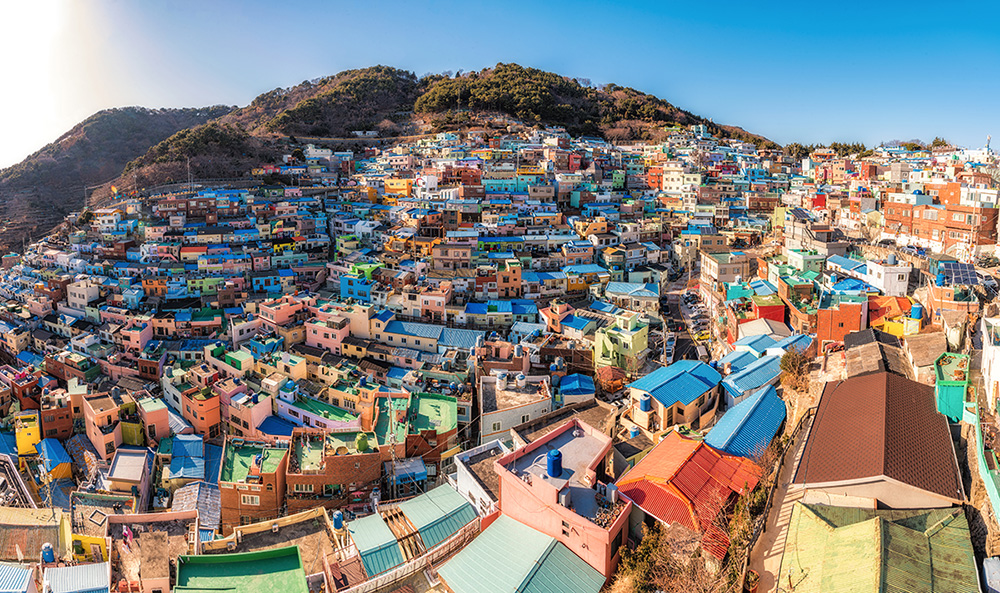 Say hello to Busan: A South Korean slice of Barcelona

Busan is the beachy second city of South Korea, an East Asian answer to Barcelona, Melbourne, or Tel Aviv. The city is a gorgeous and fluid combination of typical Korean suburbs, laid-back beach fronts, picturesque scenery, and glittering commercial districts. Little-known to the tourist crowds yet much-loved by the few that make their way there, Busan offers an extraordinarily pleasant slice of South Korean life away from the sprawl of Seoul.

The city presents arriving visitors with a series of pleasing harmonies between seemingly opposed ideas. The sunlight glints off silver skyscrapers, hemmed in by dozens of green hills and mountains. Great bridges on stilts ferry commuters for miles, high above a calm azure sea. The city’s motto is ‘Dynamic Busan, City of Tomorrow’, and yet Busan, relatively undamaged in the Korean War, is also one of the best cities in the country to experience the flow of traditional Korean life.

Busan has six official beaches, each distinct in their atmosphere. This could easily be another article entirely (watch this space) and so for now, we will stick with the most popular: Haendae. Central to the city and famed for its good swimming and wide variety water sports, the pristine, skyscraper-flanked Haeundae Beach is one of the most famous in the country. It’s a buzzing scene all year-round, although during the summer months it can get very busy, naturally.

Haeundae Beach is more than just a sea breeze and sandy toes. There’s an underground aquarium which features a dazzling underwater tunnel, bicycles for hire (find the rental shop beneath the Jwa Suyoung Bridge!), and even a small ‘folk square’, where you can enjoy such traditional South Korean games as Korean wrestling, tug-of-war, neoldduigi*, tuho**, and yutnori***.

If you’re seeking night-time antics and glittering streets, you’ll love Marine City, in the coastal Haeundae district of Busan. This is new, glitzy neighbourhood, contrasts strongly with the more quiet, laid-back portions of Busan. Visitors are drawn here by the views offered from the cluster of residential skyscrapers in the area, including the curiously-titled ‘We’ve the Zenith’ complex, which was once the tallest residential complex in the world.

Marine City is peppered with high-end shops, cafes and restaurants, as opposed to the many street-food stalls and market carts that are so prevalent in the rest of Busan. Head towards Haeundae Beach for a wealth of cultural experiences including sashimi restaurants and swanky art galleries on Dalmaji-gil Road. This spot is well known by locals as a prime location for watching sunsets and sunrises due to its unique orientation. Follow this road to the end to find a charming pair of lighthouses (one red, one white) and a gorgeous view.

Being on the coast, the city is awash with the freshest seafood, and the fish markets are the places to go for various local delicacies at prices that won’t break the bank. The enormous warehouse known as Jagalchi market makes for the biggest and most famous seafood market in the city, and many an hour can be enjoyed wandering through its rows of quaint wooden stalls and soaking up the boisterous ambience. Perfect for picking up a few mouth-watering ingredients.

For the brave: Culinary adventurers can introduce their tonsils to all manner of Lovecraftian hors d’oeuvres, such as sea squirts, wriggling octopus tentacles and gaebul, a supposed aphrodisiac locally known as penis fish.

Elsewhere, the central Busan neighbourhood of Nampo-dong is packed with stalls offering Korean street food, including haemul jeongol (spicy seafood hot pot), hotteok (stuffed sweet pancakes), and dakkochi (chicken and vegetable skewers). Check out the nearby Gukje market too, for fish cakes, donuts, waffles, Korean toast, rice cakes, dumplings and sausages – be warned, the choice is vast, outrageous and delicious, so spend your time browsing the stalls before committing!

Mentioned above, Gukje market isn’t only for food. Through the labyrinth of stalls you’ll find just about anything, from fire extinguishers to pyjama bottoms, from summer dresses to chainsaws. Always busy, always exciting, merely watching the locals do business is fascinating in itself. The market isn’t made for tourists, and many signs are in Korean; you may not quite understand what you’re looking at, but you’ll feel the electricity of the market atmosphere nonetheless.

Know before you go: It’s mostly cash only, and prices are generally non-negotiable!

Also in Busan you’ll find the world’s largest department store, which admittedly may not sound too inspiring but is actually a hoot, and presents a very modern face of South Korea. The department store Shinsegae houses an ice rink, a golf driving range, a rooftop garden, a cultural performance hall and ‘Spa Land’, a luxury jimjilbang (a Korean spa and sauna). The jimjilbang is a great idea for those who want to experience a Korean spa but are too intimidated by somewhere more traditional!

Busan is home to one of South Korea’s only coastline temples, the gorgeous Haedong Yonggung. The temple was built in the 14th century by famed Buddhist teacher, Naong Hyegeun, and contains dozens of shrines and statues, as well as a Buddhist sanctum contained in a cave, and a stunning three-storey pagoda guarded by stone lions symbolising joy, anger, sadness and happiness. Visitors can descend 108 lamp-lit steps from the temple to the sea to view the sun rise or set.

On the far side of the city, tucked up in the hillside high above Busan, you’ll find the Gamcheon Culture Village. Blessedly free from international visitors, Gamcheon began life as a poor suburb built deliberately away from the docks – far away enough as to not be an eyesore, yet just close enough so that the people living there could be used for cheap labour. Savvy locals subsequently daubed their homes in an explosion of vibrant colours, and filled up any free wall space with fun artistic murals. Today, Gamcheon is one of Busan’s most iconic spots.