Skip to content
Thank you for signing up!
Subscribe to our Newsletter
HOME » Blog » You’ve not been to Seoul until you’ve seen these neighbourhoods

Seoul’s Neighbourhoods: Which Should You Visit?

The city of Seoul is a glittering jewel in the weighty crown of East Asia. The fourth-largest metropolitan economy in existence (behind only Tokyo, Los Angeles and New York), yet we rarely hear of it… and we are missing out.

Most cities only manage to be one or two things, perhaps a bouncing nightlife and a picturesque harbour, shoot for a couple of quirks and rest on their laurels. But Seoul isn’t most cities.

Seoul’s got it all.

That’s why we feel duty-bound to present to you this whirlwind run through of the Seoul’s hottest spots and flyest ‘hoods.* The Korean word ‘dong’ means neighbourhood, while ‘gu’ means district; there are 25 gu in Seoul, each of which is comprised of several dong. We’ve selected the finest of these dong for you below. Enjoy. 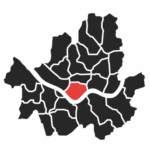 If you love food and shun sleep, you’ll dig Itaewon**. Slower-paced during the day, as night falls you’ll find crowds of international young people spilling out of bars and clubs and congregating in alleyways. It’s a fun place for a rowdy night out enjoying food and conversation from every corner of the globe. Expect to hear a lot of English spoken as you walk around; this is a big expat area now, having been home to a US military base for over a decade.

Sneaky Tip: if you’re seeking a similar vibe for your evening but fancy something a little more relaxed and local, then from Itaewon head west a few blocks to the neighbourhood of Noksapyeong, which has pretty views of over Seoul and a less westernised feel. 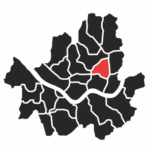 The marketplace in fashionable Dongaemun (which, somewhat confusingly, is also called Dongdaemun) is the neighbourhood’s biggest draw – and with good reason. It’s less a single market, more an expansive commercial district packed with a mixture of shopping malls and traditional stalls. Expect sensory bombardment; a dizzying array of exotic fabrics and foodstuffs. Oh, and trust us – you’ll want to arrive with an empty stomach. It’s easier to wander around during the evening as the crowds thin.

Once you’re appetite is sated, aid your digestion with a stroll around the area. Worth checking out is the Dongdaemun Design Plaza, designed by world-renowned architect Zaha Hadid, which features a rooftop park, giant exhibition spaces, and several space-age stores. Wind down after by hanging out down at the much-loved Cheonggyecheon stream that runs through the area, which makes for a romantic spot to sit entwined with a lover – or, you know, slouching on your own with your trousers unbuttoned after gorging yourself at the market. 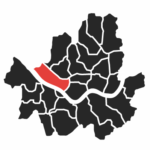 Yes, you read that right: Marijuana Boat. To answer your next question: no. The reason its named thus is the used to export various hemp-fashioned goods in the cities maritime past – ropes and sails and whatnot. Today, the dong of Hongdae is a vibrant student spot bursting with live music, urban art and trendy cafes. The effortless cool of the place comes from the nearby Hongik Daehakgyo, or Hongik University, that gives the area its name. The university is one of the top fine art collages in the country, and it seems the creativity has spilled out into the streets.

Though being gentrified slowly, the area is still much-loved by musicians and artists and is one of Seoul’s grooviest scenes***.

A fine selection of wise suggestions: 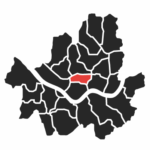 Shopaholics and fans of unbridled consumerism, ready yourselves: Myeongdong is one of Seoul’s most-loved shopping areas. The area is brimming with vast department stores, cosmetics shops, and fashion boutiques. The sort of stores you can expect are in the mid to high price range, and very international. Fashionable youngsters love to strut their stuff here, expect to see some eye-opening ensembles as you float around the hundreds of restaurants, hotels, cafes, shops and cinemas.

One of the wildest experiences in Myeongdong is the NANTA Theatre. It’s erm – well. It’s quite hard to describe. To say it’s a comedy celebrating the country’s cultural lineage doesn’t give you the full picture. So… imagine a musical set in a restaurant kitchen where they play their utensils like instruments, there’s acrobatics and a lot of fire, some sexy dancing and kimchi flying everywhere. Just go take a look. 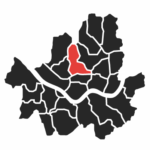 History buffs and culture vultures, your time is now. This area is made up of pretty and traditional-looking Korean streets, and is sandwiched nicely between Seoul’s two palaces – both of which are very beautiful and, frankly, an absolute mouthful: Gyeongbokgung Palace (a UNESCO world heritage site) and Changdeokgung Palace (ditto). Naturally, around this part of Seoul is where you’ll find most of your souvenirs and traditional trinkets.

For a great day out around Insadong, we’d recommend wandering in a large circuit between the two palaces, passing from one to the other via Insadong’s busy main street – down which you’ll all manner of hand-crafted Korean delights – spooky traditional masks and such – to fawn over. The Cheonggyecheon stream is a little way to the south, and is a particularly pleasant spot to soak up some rays lounging beside the water. Plus, it’s often lit up with colourful lanterns! After, hit the north of Insadong for the Bukchon Hanok Village, a traditional Korean village with those tiled curling roofs that look so brilliant in photos.

Sneaky Tip: For the brave, thrifty or exhibitionist amongst you, entry to Gyeongbokgung Palace is free when you wear traditional Korean hanbok dress. Look out for places around the neighbourhood where you’re able to hire it! 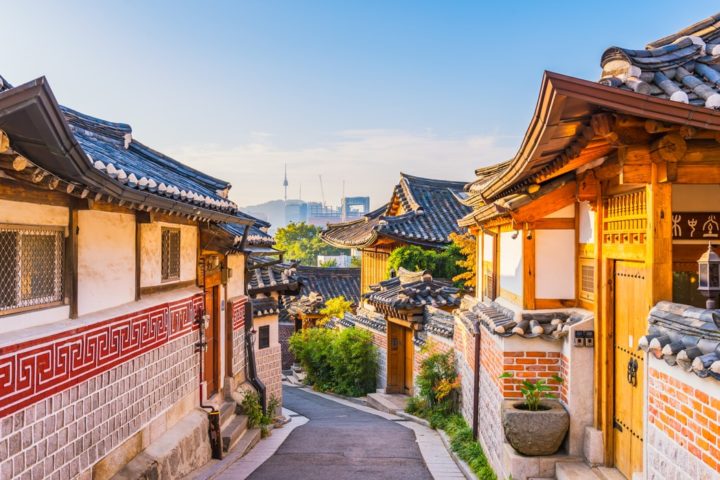 Namdaemun is home to Korea’s oldest and biggest market – and we mean big.The market is so tangled it makes your old headphones look like a pair of freshly ironed slacks. You’ll get lost, but embrace it – a great way to spend an afternoon is to simply drift through the pinwheel of colours, sounds and smells, seeking out the hidden gems.

Bits you can pick up at the market include: stationary, appliances, jewelry, houseware, clothing, accessories, purses, toys, cosmetics, eyewear and a lot of food. Most stalls are open almost 24/7, so in the distressing event that your microwave bites the dust at 3am on a Wednesday morning: you know where to go.

Namdaemun market began life as an illegal fish market in 1414. By the late 19th century, the site had some 85 permanent stores, and was Korea’s first permanent market. Just over a century later, the site is home to over 10,000 stalls and vendors. Crikey. 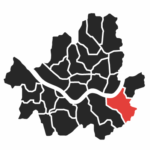 Get this: ‘Jamsil’ is the Korean word for a room where sericulture takes place. And get this: ‘sericulture’ is the ancient and mystical art of coaxing silkworms into producing silk. It’s an incredibly delicate, nuanced, and slightly gross procedure that results in pretty silken clothing. And Jamsil is called Jamsil because, yep, a lot of sericulture used to go down here.

But enough about the cultivation of insect secretions to make fancy lingerie: what is there to do locally?

Jamsil has two whole baseball teams calling it home: the Doosan Bears and the enigmatically-titled LG Twins. If baseball’s not you’re thing, there’s always Lotte World, the world’s largest indoor theme park which looks like it was designed by Walt Disney after a heavy weekend in Vegas with Hunter S Thompson. There’s also Lotte World Tower – the tallest building in South Korea at 555m, and 6th tallest in the world. It has one of those glass viewing platforms if you feel like terrifying yourself.

Meaning ‘South of the River’ 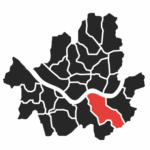 If there’s one district you’ll recognise the name of it’s this one, thanks to the 2012 (seven years ago?!) song ‘Gangnam Style’ by portly Korean singer PSY. To Seoul’s local, Gangnam is a fashionable business district best for high-end hotels, flash cars, pricey shops and an abundance of plastic surgeons.

The COEX Mall – largest underground shopping centre in the whole of Asia – draws a large number of visitors and houses its own aquarium. There are a ton of clubs in the this part of Seoul too, mostly playing EDM or hip-hop; party until the morn cometh in clubs with silly names like The Octagon, Answer, and Syndrome. Expect a hefty cover charge and a wild night.

Close to the river, the Apgujeong area of Gangnam is only a set of real housewives away from being South Korea’s Beverly Hills – they’ve even got their very own Rodeo Drive, (well, ‘Rodeo Street’, anyway). It’s not uncommon to see Korean glitterati milling around the famous ‘The Galleria’ department store, splurging on Gucci, Cartier and Versace.

One for the architecture fans:

The Chungha Building in Apgujeong is quite pretty after dark.

And there you have it: Seoul completed

Actually, that’s not true. We’ve barely dipped a toe into the ocean of possibility that is the capital of South Korea. You can visit for a week, you can live there for ten years; there’s always something to knock your socks off – often just around the next corner. 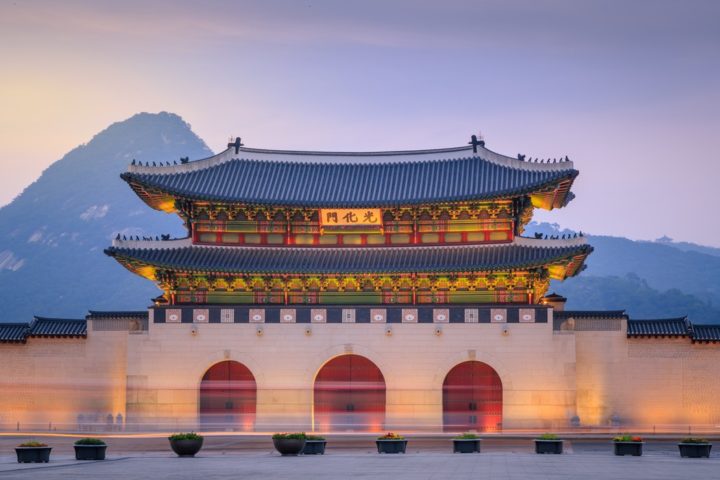 * InsideAsia Tours would like to state ‘flyest hoods’ is a language choice made solely by our copywriter, and we do not endorse such brazen tomfoolery.