Nine or ten years ago, there weren’t many people on this side of the globe who’d tried South Korean food.

In fact, few of us would even have been able to say what typical South Korean food was. Was it maybe… a bit like Chinese food? Their countries are relatively close to one another, right? Or Vietnamese? Maybe some sushi thrown in for good measure?

Well, by gosh it’s 2019, and times have changed. South Korean restaurants are in every city, and we all sort-of know what kimchi is. Do you remember your first South Korean barbecue? Do you remember the thrill of pinching the meat with your chopsticks and eagerly laying it on the grill? Watching it sizzle away, then plucking it off at the perfect moment, popping it into your mouth, and being floored by the unexpected explosion of flavour? My first Korean BBQ was in the hazy summer of 2014. Five years ago. I still think about it weekly.

South Korea’s cuisine is way ahead of much of the world in terms of health, too. Korean schoolchildren learn about the important of food from an early age: every school has a nutrition teacher (a stroke of absolute genius). This goes a long way towards explaining why Koreans are so conscious of their health and diet; in 2019 South Korea ranked 9th in the World in Global Wellness Index, and research by Imperial College London in 2017 showed that South Koreans are set to live longer than anyone else by 2030.

If that wasn’t enough to assure you of South Korea’s culinary prowess, know this: there are 26 Michelin-star restaurants in Seoul as of 2019, including two with three stars: Gao, a Gangnam-based restaurant taking diners on a ‘fine-dining journey through Korea’s culinary heritage’, and La Yeon, on the top floor of the Seoul Shilla Hotel, serving traditional Korean cuisine with a modern spin.

Now,to pay homage to this most wonderful cuisine, below you will find a guide to (more or less) everything you could ever wish to know about South Korean food.

Behold: the tantalising delights they’re serving up in Seoul as we speak… 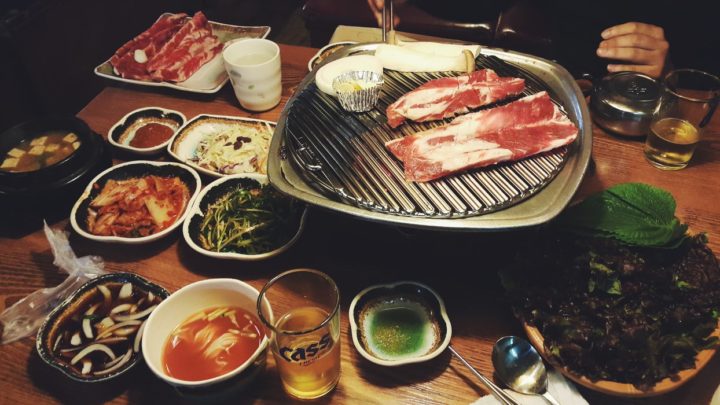 The big one. Thin slices of pork, chicken or beef are marinated in all manner of wondrous sauces and spices – soy sauce, sesame oil, garlic, chilli – and presented to you raw. It is then down to you, the diner, to cook the meat for as long as you desire via a grill that is either built into or placed upon your table. This is as much about the experience as it is about the explosive flavours. Very hands-on, very satisfying, very delicious.

Bulgogi, meaning ‘fire meat’, is made from thin slices of pork or beef marinated in a mixture of garlic, pepper, sugar, soy sauce and sesame oil. These slices are grilled on a charcoal barbecue and served in a stir fry with sesame seeds and green onions. It’s the bomb. 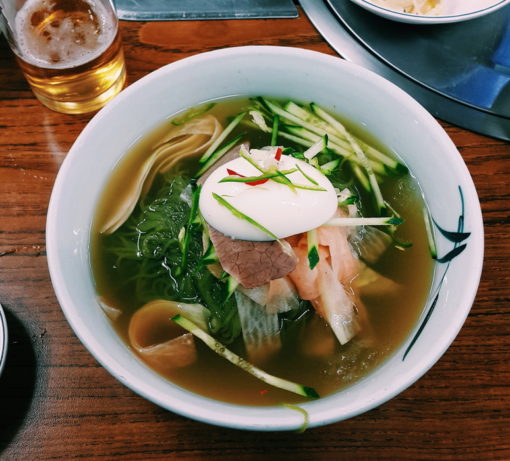 Buckwheat, or potato starch noodles, are served with eggs and diced vegetables in a chilled, vinegary broth. Admittedly this sounds, well, ghastly, but the dish is more than the sum of its parts. Eaten only in hot weather as a tasty way of cooling down, this is a healthy, quick and filling meal, much-loved by Koreans and any traveller willing to give it a try.

The mellifluously-titled ‘bibimbap’ is a rice-based dish (‘bap’ is the Korean for rice) featuring assorted veggies (‘bibim’). It’s a versatile dish, and can be served with pretty much whatever you can find in the fridge. Traditionally, however, bibimbap is made with sautéed and seasoned vegetables, a raw egg yolk, and thin slices of beef. Common veggies include cucumber, courgette, radish, mushrooms, soybeans, spinach and cabbage. It all makes for a picturesque, healthy bowlful.

Kimchi is a massive part of South Korean cuisine, and is served as a side dish at almost every meal. Made from salted and fermented cabbage (bear with us, alright) kimchi is then seasoned with garlic, ginger, and ground red pepper. Kimchi is not only spicy and flavoursome, it’s extremely good for your health; this humble side-dish is packed with vitamins, good bacteria aiding digestion, and studies have suggested it is an anti-carcinogenic.

Fun fact: The average South Korean eats around 40 pounds of kimchi each year. In order to make this fact a bit more interesting, we looked up which animals weigh 40 pounds (18kg). A gazelle weighs 40 pounds, apparently. So does a baboon. Something called a bush duiker also weighs 40 pounds, but we’ve no idea what one is.

Though we live out our lives on opposite sides of the globe, when we feel under the weather we all opt for the same food: lovely chicken soup. Relied on by poorly Koreans for its nutritional value for centuries, the brothy goodness of samgye-tang contains medicinal ingredients including ginseng, jujubes, sanghwang mushroom and perilla seeds. It’s typically consumed on hot summer days and aids many seasonal ailments – including the foulest of summer plagues, hayfever.

A relatively new addition to Korean bellies, budae jjigae translates to ‘army base stew’. After the Korean War (1950-1953), food was scarce, and when the US troops stationed in the country headed off home, they left behind large supplies of typical American foods – ham, hot dogs, baked beans, spam; all manner of processed delights.

The local people who were left with these foods made use of them by adding kimchi and onions and turning the whole thing into a tasty stew. The popularity of the dish still stands, with today’s ingredients including bacon, sausage, macaroni, ground beef, mozzarella, peppers and mushrooms. Perhaps the least healthy entry on this list, but you’ve got to admit, it sounds pretty good.

Spicy rice cakes! The linguistic nightmare that is tteokbokki is one of South Korea’s most popular street food snacks. Rather than rice grains, tteeokbokki is comprised of many long, cylindrical rice cakes, which sit in a sweet chilli sauce. In the streets, stalls will sell only these rice cakes. In restaurants, however, expect to receive extras including fish cakes, seafood, ribs and noodles.

Another street food, hotteok is a pancake-like snack with a sweet filling, made from a dough consisting of wheat flour, water, yeast, milk, and sugar. Particularly popular in the winter months, hotteok is another of South Korea’s best-loved street foods, introduced to the country by Chinese migrants in the early 20th century. While mostly sweet, savoury versions of this treat are available, with flavours including cheese, kimchi, and bulgogi – and you know what those things are now! 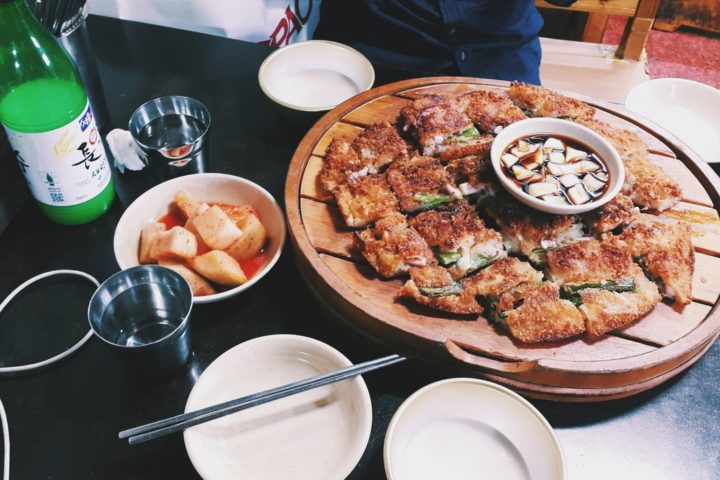 Another pancakey (yes, we make words up at InsideJapan because we are innovators) snack, pajeon uses green onions as its main ingredient. A batter is made using eggs, wheat and flour, then poured over the green onions in a hot pan. Et voila, delectable pajeon. Again, this sort of dish can be messed around with to the Nth degree. Need to clear some space in your fridge? Whack it all in there.

Fun fact: South Koreans love pajeon, especially when it rains. According to one Korean news report, sales of the snack rocket whenever the rains pour. Theories as to why this might be include that, rather adorably, the sound of the rain reminds people of the crackle as they fry their pajeon.