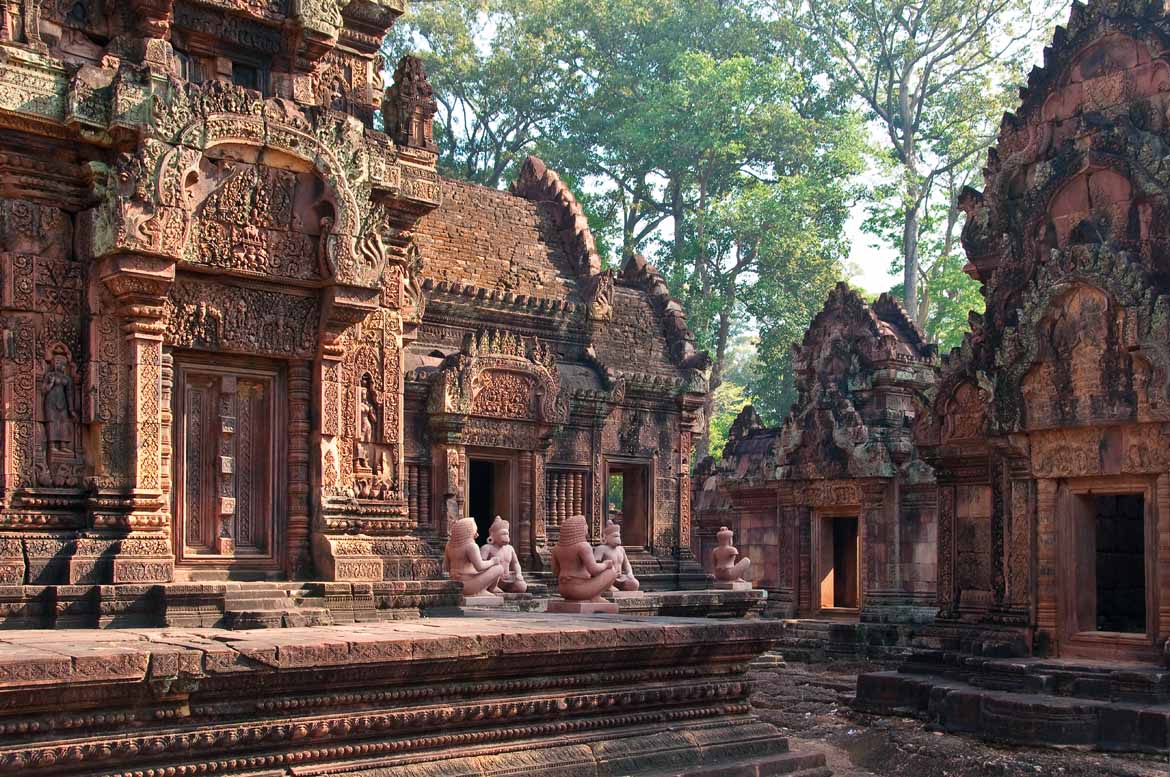 Beyond Angkor Wat: The hidden temples of Cambodia

Cambodia isn’t just about its star attraction – there are plenty of other temples to visit, each one rich in history, culture and adventure.

Angkor Wat is Cambodia’s national icon, and rightly so. Built in the 12th century, it is  preserved in a remarkable state of repair and on a staggering scale: a vast monument to human industry, with kilometres of intricate bas reliefs and an overall volume greater than the Great Pyramid of Giza. But Angkor Wat isn’t the only temple worth visiting. Though it may be the closest to perfection, there are many others in Cambodia – such as Banteay Srei – that rival it for beauty and even surpass it for atmosphere and adventure.

Where Angkor Wat is pruned and prettied to the highest possible degree of perfection, Beng
Mealea has been allowed to truly run wild: half-swallowed by the jungle, covered in moss  and falling to pieces under a proliferation of foliage. Its central tower has collapsed, its
surviving chambers are dark and strangled by vines, and visitors are permitted to climb and scramble over the rubble unchecked.

Beng Mealea certainly isn’t unknown: it’s a popular day-trip destination from Siem Reap
and can be very busy at times. Nevertheless, its tumbledown state and air of abandonment
provides one of the most adventurous experiences of any of Cambodia’s temples, making it well worth the trip.

Getting there: 1.5 hours’ drive from Siem Reap.

Most travellers have never heard of the name Preah Vihear, so it may come as a surprise to
discover that this obscure northern temple is actually the second of Cambodia’s two  UNESCO World Heritage Sites. No prizes for guessing the first.

There’s a good reason why Preah Vihear might have slipped under most people’s radar until now: Up until 2011 this far-flung corner of northern Cambodia was the site of a border dispute with neighbouring Thailand, and it was only in August 2015 that the UK’s Foreign & Commonwealth Office removed their warning against travel to the area.

Today, however, any threat of violence is thankfully long gone, and Preah Vihear offers a superb place to not only admire remarkably well-preserved Khmer ruins – dating back to the 10th century – but to do so with very few crowds around to clutter your photos. Built on a lone hill 525 metres above the surrounding plains, it also has the most spectacular views of any temple we’ve ever visited.

Getting there: Preah Vihear is pretty remote – over three hours of good road from Siem Reap. Given the drive, it’s best to spend a night at the very pleasant Boutique Hotel, located nearby.

Best for: Peace and quiet

Visitors who only set aside time for the tourist-ready temples of Angkor Wat will miss out on the thrill of discovering an ancient, overgrown temple complex in what can often be complete solitude. Though it is now accessible within a couple of hours by road from Siem Reap, Koh Ker was for a long time one of the most remote complexes in Cambodia; a forgotten capital of the Angkorian Empire.

Even today, visitors can often find themselves wandering the city’s remaining temples and sanctuaries without another soul in sight, happening upon its overgrown causeways and multi-tiered, Mayan-esque pyramid like the first explorers.

Getting there: 2 hours’ drive from Siem Reap.

Located in the depths of northern Cambodia, Banteay Chhmar is home to what was once  one of the country’s largest temple complexes: the ‘Citadel of Cats’. Built by the warrior king responsible for the famous faces of Bayon, root-strangled Ta Prohm and the Terrace of the Elephants, most of its Angkorian relics have now all but been subsumed by their surroundings.

Though this means there are fewer really striking edifices than at some sites, it does make for a more exciting and adventurous experience, as you scramble over rubble and tramp through thick jungle to make your own discoveries. One of the best things about Banteay Chhmar is the proximity of the local village and surrounding countryside. This means that the ruins feel less like a vast museum – as can be the case at more controlled sites – and more like a piece of living history.

Top tip: Leave time to combine your visit to the ruins with some exploration of the surrounding countryside. We recommend spending the night at a local homestay for an insight into rural Cambodian life.

Unique amongst Angkorian temples, Banteay Srei’s pink sandstone certainly sets it apart from its neighbours. Not only known for its vibrant colour, the “Citadel of Women” is also renowned for its astonishingly intricate bas reliefs, which are widely acknowledged to be the best of any temple in Cambodia. So well does this pink sandstone lend itself to this style of carving that the beautiful designs have survived almost completely undiminished for over a millennium.

Getting there: 45 minutes’ drive from Siem Reap.

Top tip: Visit in the late afternoon to witness the bas reliefs come to life in the dying light.

If you have been seduced by photos of the engulfing roots at Ta Prohm (AKA “Tomb Raider
Temple”) but don’t like the thought of jostling for space with a hundred like-minded individuals, Sambor Prei Kuk is a wonderful alternative. Unlike the other temples on this list, Sambor is actually pre-Angkorian – built by the Chenla civilisation of the sixth to the ninth centuries. With no grand centrepiece, the site instead consists of small, ramshackle towers dotted through the surrounding jungle, many of them well on their way to being completely consumed by strangling vines and vegetation.

Top tip: Rent a bicycle and explore these jungle-clad temples under your own steam.

Our Hidden Temples of Cambodia itinerary focuses on Cambodia’s lesser-known temples, including all of the sites mentioned in this article. The trip also includes three nights in Phnom Penh, an introduction to Khmer art at the National Museum, and some of Angkor’s more famous sites: Bayon, Ta Keo, Angkor Thom and the magnificent Angkor Wat. Get in touch to find out more.

This article originally appeared in issue #1 of East, the Inside Asia Tours magazine. Click here to download a copy or sign up to receive your FREE paper subscription.