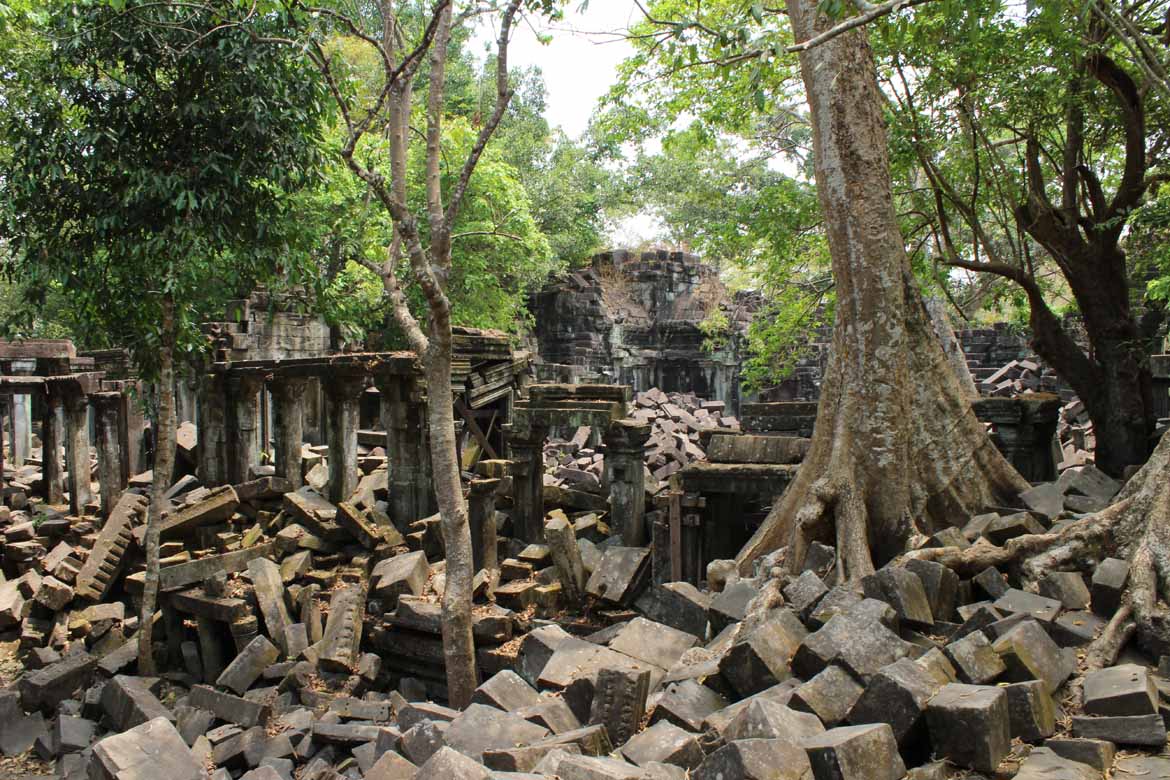 Cambodia is positively awash with temples. You might have heard of Ta Prohm (the so-called “Tomb Raider Temple”) or Bayon (the one with the big faces), and you’ve most probably heard of Angkor Wat – the emblem of Cambodia. But what of the rest?

The UNESCO-protected Angkor Archaeological Park alone extends over 400 square kilometres, making it one of the largest archaeological sites in the world. It contains dozens of temples, all in varying states of disrepair, and beyond its boundaries there are many more – from northerly Preah Vihear on the border with Thailand to tumbledown Banteay Chhmar, and even more between.

Time constraints and the inevitable onset of the dreaded temple fatigue mean that most tourists never make it beyond the big-name temples of Angkor, but with so many other great sites to see it’s well worth planning some a day to visit one of the outlying ruins – as I did on a recent visit to Siem Reap.

Beng Mealea is one of the easiest non-Angkor temples to visit from Siem Reap. Jump in a tuk-tuk (or order a taxi at your hotel, if you’d like a little more comfort!) for the moderately bumpy, 1.5 hour ride, taking you through the Cambodian countryside past stilt houses and farms. Your driver will know where to stop to purchase a ticket along the way for 5 USD.

Beng Mealea, like all the Angkor period temples, was originally built as a Hindu place of worship – and like most of them it was constructed in sandstone. Not much (read: basically nothing) is known about the temple’s origins and history, but its style and layout suggest that it was built during the reign of Suryavarman II, in the 12th century. What is clear is that it was one of the Khmer Empire’s largest temples, built to the same layout as Angkor Wat, and once stood at the midpoint on an ancient Angkorian road linking Angkor Wat with Preah Khan Kompong Svay in the north.

A new road built to the temple complex of Koh Ker, passing right by Beng Mealea, has made this temple more accessible to visitors – but it’s still not on the radar for most temple-tramping tourists. No restoration work has been carried out beyond cutting back some of the encroaching vegetation: the temple’s central gallery has collapsed, vines strangle the walls and passages, and tree roots squeeze between the stones. There is a wooden walkway (apparently originally built for the filming of Two Brothers, a 2004 film by Jean-Jacques Annaud) which provides access to the central area and parts of the outer galleries, but much of the temple can still only be accessed by scrambling over fallen masonry and climbing up walls in true Indiana Jones style.

As the Angkor temples see more and more visitors coming their way, it’s likely that more people will search out lesser-known places like Beng Mealea to indulge their sense of adventure. Already there are a few stalls selling tourist tat lining the entranceway, and I certainly wasn’t the only one wandering about the temple site – but nevertheless, Beng Mealea remains one of the best places to get a taste of real Angkorian exploration.

I visited Beng Mealea as a half-day trip in the morning, leaving an afternoon to relax by the pool. You might like to head over in the afternoon (for the best chances of a tourist-free experience), or combine it with a visit to the temples of Koh Ker for an awesome day trip.

I’ll be writing more about the little-known and off-the-beaten track temples of Cambodia soon, so keep your eyes peeled – or sign up to receive updates to your inbox. In the meantime, have a look at Liam’s excellent piece on Preah Vihear, another spectacular temple that few travellers know about.