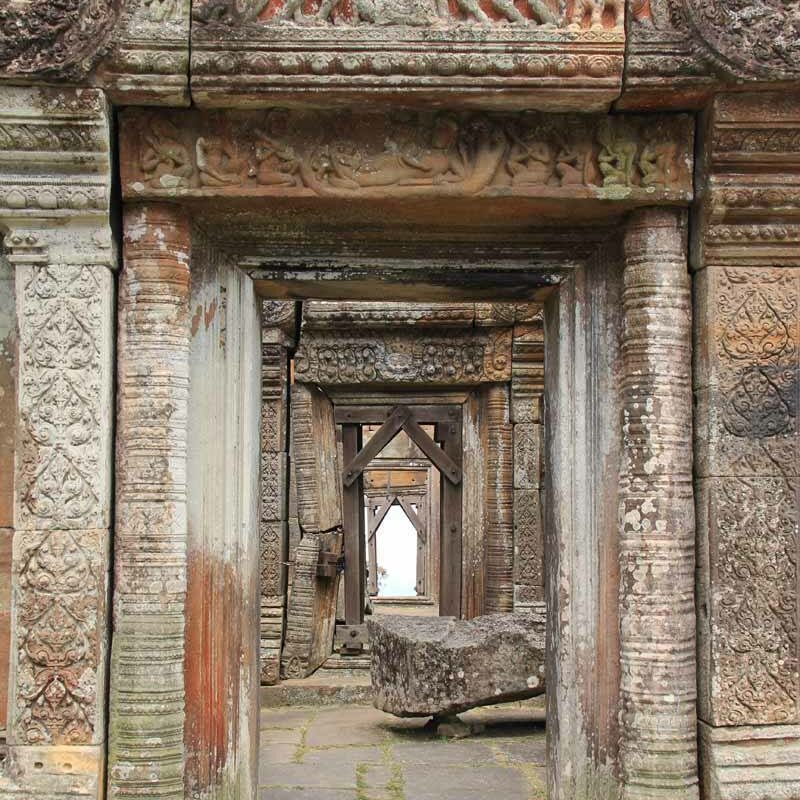 With the UNESCO World Heritage Site of Preah Vihear newly declared safe by the Foreign & Commonwealth Office in the UK, we couldn’t rest before we’d sent someone to check it out. Here, travel consultant Liam reports back.

For most visitors to Cambodia the ancient Khmer temples of Angkor are the one “must-see” destination on their trip. This is not surprising considering the awe-inspiring beauty and fascinating history of the grand temple complex. However, there is another lesser-known gem of a temple, which was constructed around the same time as Angkor, and is well worth visiting for those who are willing to venture that little bit further. It is the ancient Hindu temple and World Heritage Site of Preah Vihear.

Preah Vihear was built on top of Pey Tadi, a steep cliff in the Dangrek Mountain range that marks the natural border between Cambodia and Thailand. Due to its location right on the border, there have been many disputes – and sometimes military combat – between the two nations, both of whom claim the temple as their own. The most recent conflict ended in 2013, when the Thai government conceded to the International Court of Justice decision that the site lay on Cambodian territory, and withdrew their troops from the area. The remnants of this latest conflict can still be seen with military bunkers dotted around the site, as well as scaffolding to secure the damage caused by Thai artillery fire to the complex boundaries.

On my first visit to Siem Reap back in 2007 I got to experience the wonders of the Angkor complex, but Preah Vihear at the time was far more difficult to access, requiring a motorbike to traverse the rough, washed-out roads leading up to the site. On my recent return to the area I discovered that a nice smooth, new road had been built from Siem Reap right to the bottom of the temple mountain – so I finally got to visit the temple I had always wanted to see.

Preah Vihear’s temple complex runs 800 metres along a north-south axis facing the plains to the north. It essentially consists of a causeway and steps rising up the hill towards the sanctuary, which sits on the clifftop at the southern end of the complex. Although this structure is very different from the usual “temple mountain” style of building found at Angkor, it serves the same purpose as a stylised representation of Mount Meru: the home of the gods.

Upon reaching the top of the mountain in a truck – needed for the last stretch due to the steepness of the road – I was taken to the ancient steps on the Thai side and northern end of the complex, which leads to the first of five gopuras (towers). The steps on this side are still in very good condition and serve as a grand introduction to the complex.

Each gopura is connected by a long causeway and has its own set of steps and marks a change in the height of the temple, so they have an increasing impact as they get higher and higher. Each time I reached a new level it felt like I was being led to something more impressive and important.

Similarly to the famous Ta Promh “Tomb Raider” Temple in Angkor, Preah Vihear still has many roots and trees growing through its structures, so you can really get a sense for how it would have looked when first discovered.

By the time you reach gopura five, the last structure to have been built, it is clear that the design is far more advanced and the carvings more intricate than in any of the other towers. The first four gopuras once had wooden roofs which have now rotted away, but with gopura five they used improved architectural techniques to build a stone roof. The roof on the outer passageway is still intact and the remnants of the central collapsed roof are still there to be seen.

After exiting the final gopura on the edge of the cliff, you can stand next to the old stone cutting site and cast your eyes over the vast flat plain stretching over the Cambodian countryside towards Siem Reap. You can see the mountain range separating Thailand and Cambodia stretching off into the distance towards southern Laos, and miles and miles of flat land on either side. It’s a breathtaking location, and adds to the uniqueness and magic of magnificent Preah Vihear.

To read more about Preah Vihear, check out this recent blog post. If you’re interested in visiting the temple, our Hidden Temples of Cambodia itinerary gives a fantastic introduction to Preah Vihear and some of the country’s other lesser-known gems – as well as its more celebrated locations, of course. Just get in touch with one of our experts to find out more or book a trip.