Skip to content
Thank you for signing up!
Subscribe to our Newsletter
HOME » Blog » Kampot province: Slow travel in Cambodia

Perhaps it is the contrast from the construction-heavy, frenzied pace of Sihanoukville but in the small city of Kampot, life seems to tick along at half speed. 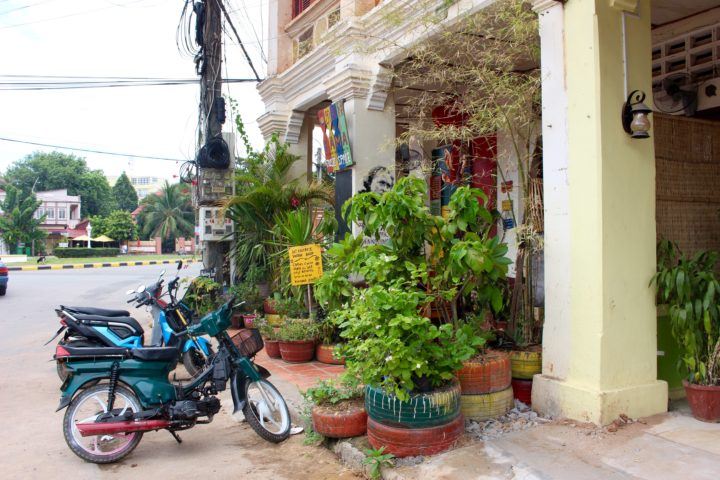 Just three hours from Cambodian capital, Phnom Penh, two hours from lively Sihanoukville and barely an hour from the border with Vietnam, this unassuming province is the perfect excuse for a change of pace.

A grid-like layout makes Kampot city an easy place to explore on foot – even with my questionable map skills. Save for the occasional crawling moped or tuk tuk, the wide roads – framed by huge pots of colourful flowers and towering shrubs – are quiet, and while English signs pedal guesthouses or bicycle hire, the sleepy streets are curiously absent of tourists.

On the eastern fringes, an esplanade with a popular fish market runs alongside the vast Praek Tuek Chhu river, and the imposing Dâmrei Mountains of Bokor National Park can be spotted in the distance. Inland, faded buildings with balustraded balconies, and bakeries selling croissants, madeleines and baguettes hint at the city’s former life as a French administrative centre. In the years since they left, myriad travellers have been captivated by the city’s charm; vintage clothes stalls and hip organic cafés presumably the result of wandering expats who never returned home. With tree-lined boulevards, a smattering of restaurants and striking scenery beyond, it isn’t hard to see why. 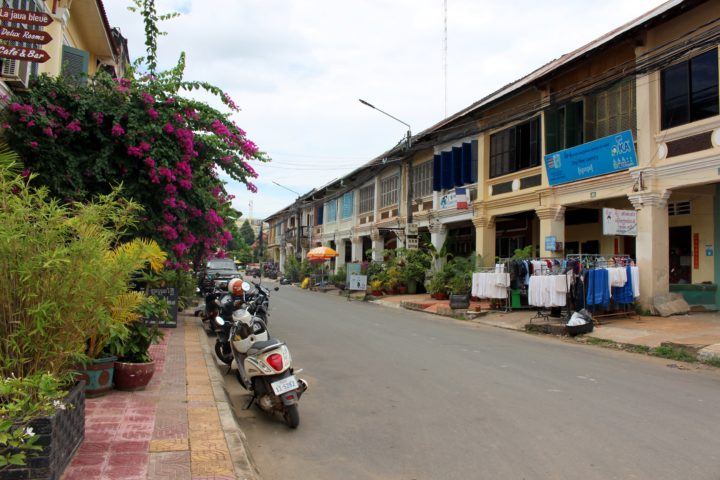 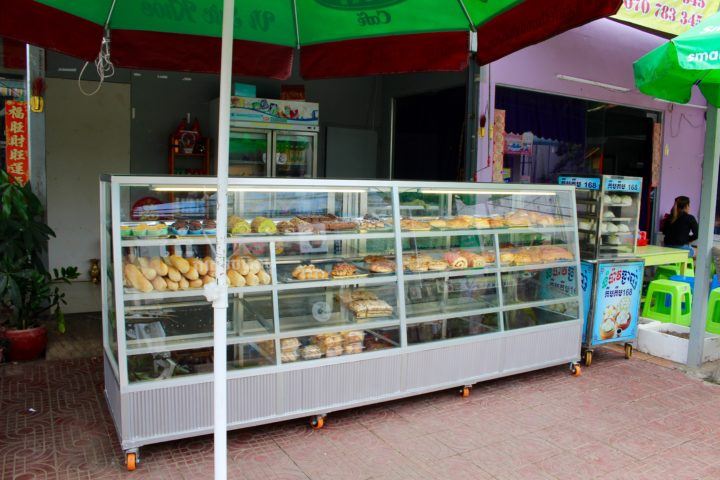 During the difficult French presence and the province’s devastating experience under the Khmer Rouge rule – 90,000 were murdered in this area alone – Kampot has remained an agricultural heartland producing abundant salt, pepper, rubber and durian fruit. Despite a smell and taste likened to rotten onions and raw sewage, durian is so popular in these parts it’s been venerated with its own roundabout. 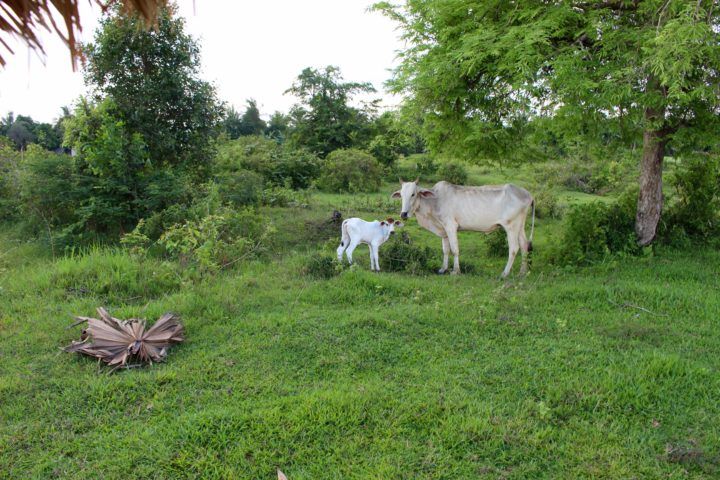 In 2013, husband and wife team Nathalie Chaboche and Guy Porre left their native France behind to start La Plantation, a 20-hectare organic pepper plantation in Kampot’s Kon Sat area. Now, with the help of at least 100 local staff including pepper expert Keak Heng, their produce has become a favourite among chefs and exported to Europe, Japan and the US. 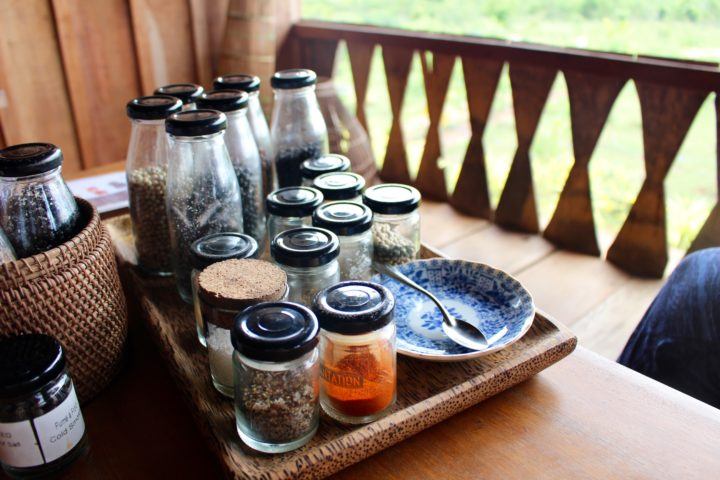 The main building, a grand wooden structure that doubles up as a shop, restaurant and event space, is an old monk refectory rescued from a local village – an effort to preserve diminishing traditional Khmer architecture. Inside, a small group of tourists listen intently to a presentation about the farm in French and I take a plum seat on the wraparound veranda where views stretch for miles.

Guy slips out and brings back a tasting platter of black, red, white and long pepper, each from the same vine but processed differently. I go in a little too enthusiastically and wash down fragments of steadfast peppercorns with their signature passion fruit fizz. Delicious, but not to be inhaled. 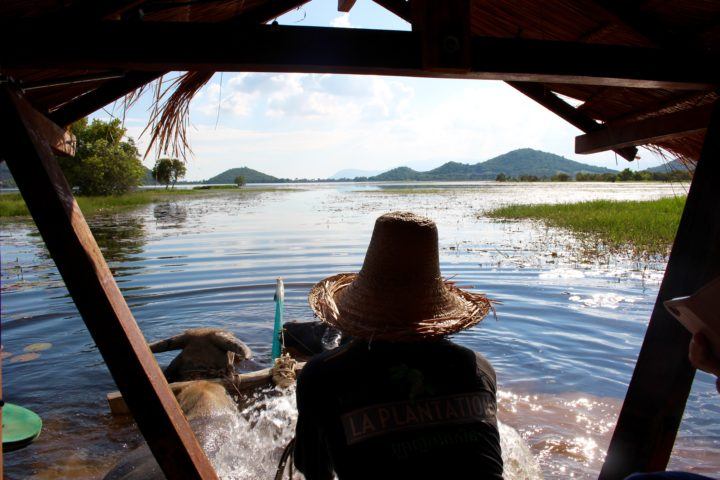 Walking through the plantation, he points out some of the 22,000 Kampot pepper posts that stand alongside mango, turmeric and pineapple plants, pausing to introduce the oxen that work the land.

Staff busy themselves in each corner of the farm; ladies chat animatedly while drying out peppercorns, oxen are washed by a chirpy farmer in the lake, chefs cook up a storm in the two restaurants (one Khmer and the other French) and flowers are carefully tended to by a team of gardeners. Despite cookery classes, free presentations and fallow tours, agritourism is still a side note to pepper production. As well as employing an all-Cambodian team, Nathalie and Guy are a socially conscious pair funding reforestation projects and a neighbouring primary school for the farmers’ children. 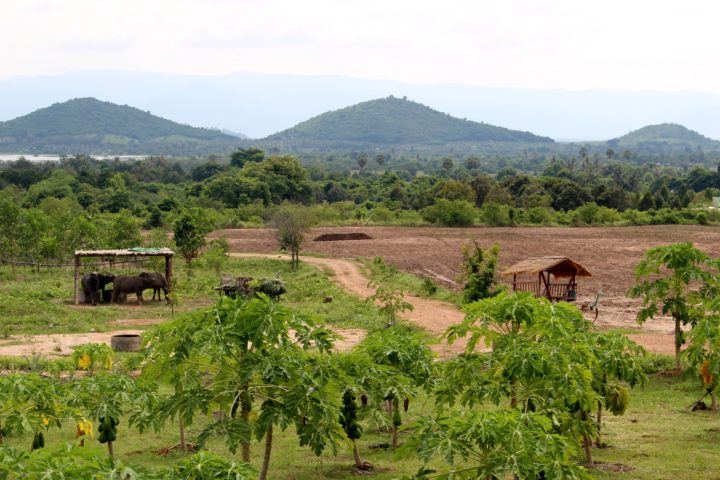 Kampot is handily located for travel in both Cambodia and Vietnam. In the local area, caves await exploration and the national park has adventure activities aplenty. Neighbouring Kep province has a seaside feel with renowned seafood restaurants, and Cambodian capital Phnom Penh is three hours away. If you see yourself island hopping, Sihanoukville is the springboard to Koh Rong, and Ha Tien port across the Vietnam border has regular ferries to Phu Quoc.

Curious about Kampot? Get in touch with our team to find out more about travel in Southeast Asia.