Skip to content
Thank you for signing up!
Subscribe to our Newsletter
HOME » Blog » Up in the hills: Homestay experience in Ha Giang, Vietnam

Claire’s homestay experience gave her a unique insight into Vietnamese village life. Joining festivities with the locals, sampling unusual delicacies and seeing some ‘only in Vietnam’ sights are still some of her favourite ever travel memories.

Before I’d even booked my plane ticket to Vietnam, I was sure about two things; I wanted to do some community volunteering and I wanted to stay in a traditional village homestay.

Having successfully ‘wwoofed’ my way around several continents (not as dodgy as it sounds!) I’m a massive advocate for staying with local people. It really is the best way to get to the heart of a country.

More often than not, you’ll be treated to delicious home-cooked meals, be taken to off-the-beaten track places, and make friends for life. Homestays are also a great way of ensuring that your money goes straight to the people you stay with. Or at the very least is invested back into the local community, rather than being swallowed up by a giant corporation.

As I was keen to engage in some volunteering work, my homestay experience was organised through a NGO programme. I was to spend two weeks in Thon Tha village, just outside Ha Giang in northern Vietnam. The village is actively engaged in a responsible tourism programme and has set aside a number of houses as homestays to preserve Tay traditional culture and create job opportunities for local people.

5 reasons to spend time at a homestay in Southeast Asia

There’s a famous saying ‘The journey is just as important as the destination’. My journey to Thon Tha certainly was a very memorable part of the overall experience.

Having spent a few days acclimatising in Hanoi, it was all aboard a public bus bound for Ha Giang – quite literally all aboard as it turned out. Having arrived characteristically early at the bus terminal, I found it amusing to watch crowds descend upon each bus before cramming themselves on in whatever way possible.

Amusing, that is, until my own bus finally turned up. It soon dawned on me that overcrowding is pretty much the norm on buses here.

Initial relief at having made it onto the bus, quickly turned to discomfort. I realised that I was about to spend a 7.5-hour journey pressed up against someone’s armpit.

A word of advice for all travellers to Ha Giang – for relatively little extra money, there are regular sleeper buses to northern Vietnam that make the journey significantly more pleasant. Take one of those! 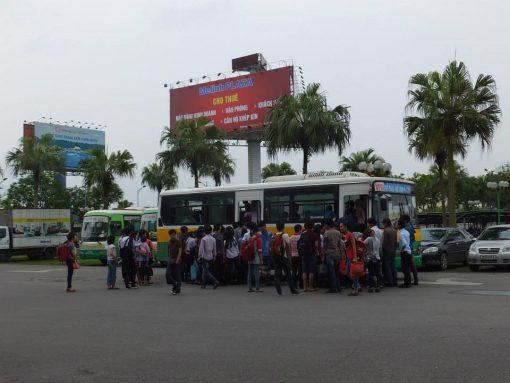 After several bus changes, 7.5 hours on the road and a random stop-off at a Buddhist festival in the middle of nowhere, I was dropped off in Thon Tha, an ancient village with a 100% Tay minority population.

I was beckoned into my new home by the owner, Mr Quyen. He invited me to sit at a large, elaborately carved wooden table for my first cup of bitter black tea (the first cup of many!). The table seemed laughably incongruous in a room with a concrete floor and no walls.

After finishing my tea, I was shown where everybody would be sleeping upstairs. Whilst every member of the family essentially sleeps in one big room, individual sleeping ‘rooms’ with a double mattress and mosquito net were partitioned off by curtains for a modicum of privacy. 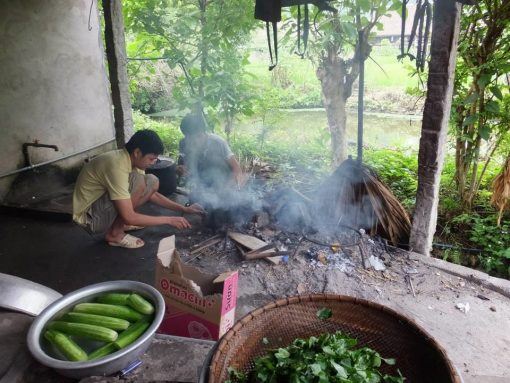 Dinner on the first evening was an enlightening experience. A fire was lit directly on the concrete floor in the corner of the ground floor room. I was invited to lend a hand washing and preparing the vegetables.

Like many Tay families, Mr Quyen and his family live a simple and sustainable life; they grow their own food and kill their own animals for important occasions. It quickly became apparent that an unfortunate pig had been sacrificed in honour of my arrival. On that first night, we were treated to a simple but delicious meal with the juiciest cuts of meat and rice. The pork meat reappeared over the course of the next week – admittedly, the cuts got ropier as the week went on, and rice was a reoccurring theme. But this was all interspersed with a good mix of delicious veg;  Morning Glory (stir-fried water spinach) was a particular favourite.

One of my stand-out memories was coming downstairs one morning to see a live chicken sitting in a bin. I remember thinking that it was a bit strange… when we were treated to a surprise chicken dinner that night – feet, beak and all – everything became clear. What can I say – at least you know the meat is fresh!

Food and drink in Southeast Asia 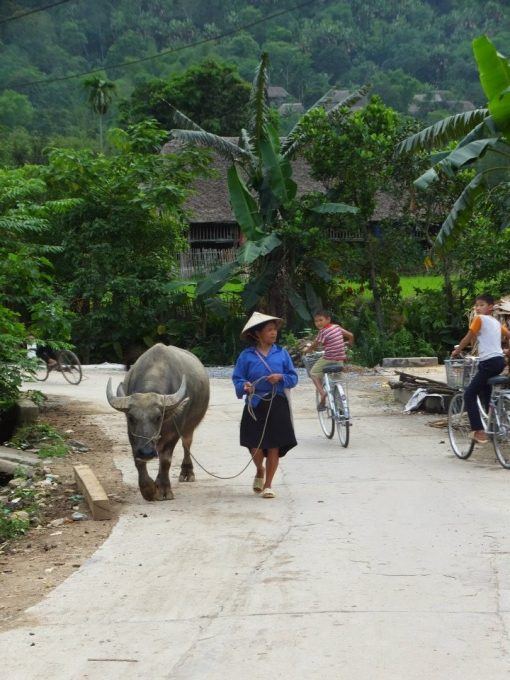 There’s no denying that I was a little apprehensive at the prospect of sleeping and spending a week in a house with no doors and no walls. I like camping as much as the next person, but a number of thoughts (admittedly some rather irrational) flashed through my mind. I bunked down on my mattress on the floor and enveloped myself in my mossie net… Would I be cold? What if it rained?

I needn’t have worried. The thatched roof dipped down low in the place of walls lending a warm and cosy feel to the upstairs floor. I also took comfort from the gentle sounds of people breathing and pottering around beyond my curtain.

One of the best things about staying in a homestay is the scope to become totally immersed in the local culture. The local children were unashamedly curious; every time we stepped out of the door, we were treated like long lost friends. And quickly roped into a boisterous game of football.

In the absence of mod-cons, I spent a lot of time outdoors, exploring the hills and wandering around the village. Everyone was so friendly and welcoming. On more than one occasion, I was summoned into the homes of local families for a cup of the black tea that I was acquiring a taste for.

However, nothing could have prepared me for what was undoubtedly the highlight of my time in the hills. On one of my daily strolls, I found myself drawn up the hill by the sound of music, and the hustle and bustle of activity. I had inadvertently stumbled across a Vietnamese wedding. Spotting me, a few family members immediately beckoned me to join in with the celebrations. I spent the next hour or so being plied with neat rice wine amidst repeated cheers of ‘Chúc vui vú’! (Needless to say, I left feeling rather worse for wear).

In Vietnam, wedding celebrations take place over the course of several days at different locations in the village. Over the next few days, we were (more officially) welcomed along to the wedding feast and introduced to the bride and groom. 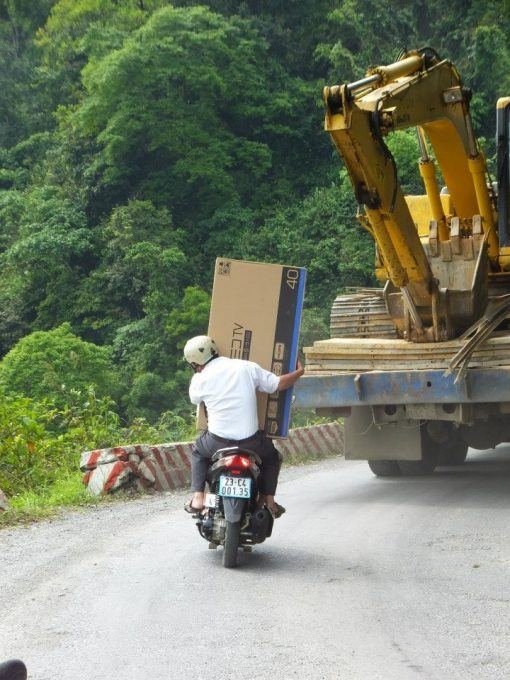 When I signed up for the homestay experience, I was expecting to spend the entire time in the village. However, it turned out that Thon Tha was a pretty good base from which to explore the local community.

One day I trekked up through the rice fields to get an incredible aerial view over the valley. Another time I borrowed a bike and rode through the countryside to the nearby city of Ha Giang. On the last day, I hopped on the back of Mr Quyen’s motorbike for a private guided tour through the mountain passes to the Chinese border. We stopped off on the way at markets and the shops of local craftspeople.

It was extremely entertaining to see the things that people managed to transport on the back of one small motorbike; from a crate full of ducklings to an extra passenger clutching a full-screen LED TV. Only in Vietnam!

Whilst the homestay experience undoubtedly took me a long way out of my comfort zone, I was pleasantly surprised to find that I didn’t feel anywhere near as isolated as I’d anticipated. Yes, there were none of the modern comforts that I’ve come to rely on. There wasn’t any wifi, no mobile phone signal, no power shower or crisp linen sheets. But the sheer beauty of the surroundings, and the warmth and enthusiasm of the locals more than made up for it.

Immerse yourself in local culture on our 16-night Vietnam Adventure self-guided itinerary – including three days in a Ha Giang homestay. 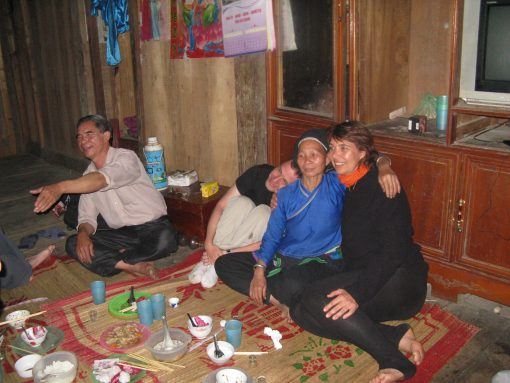