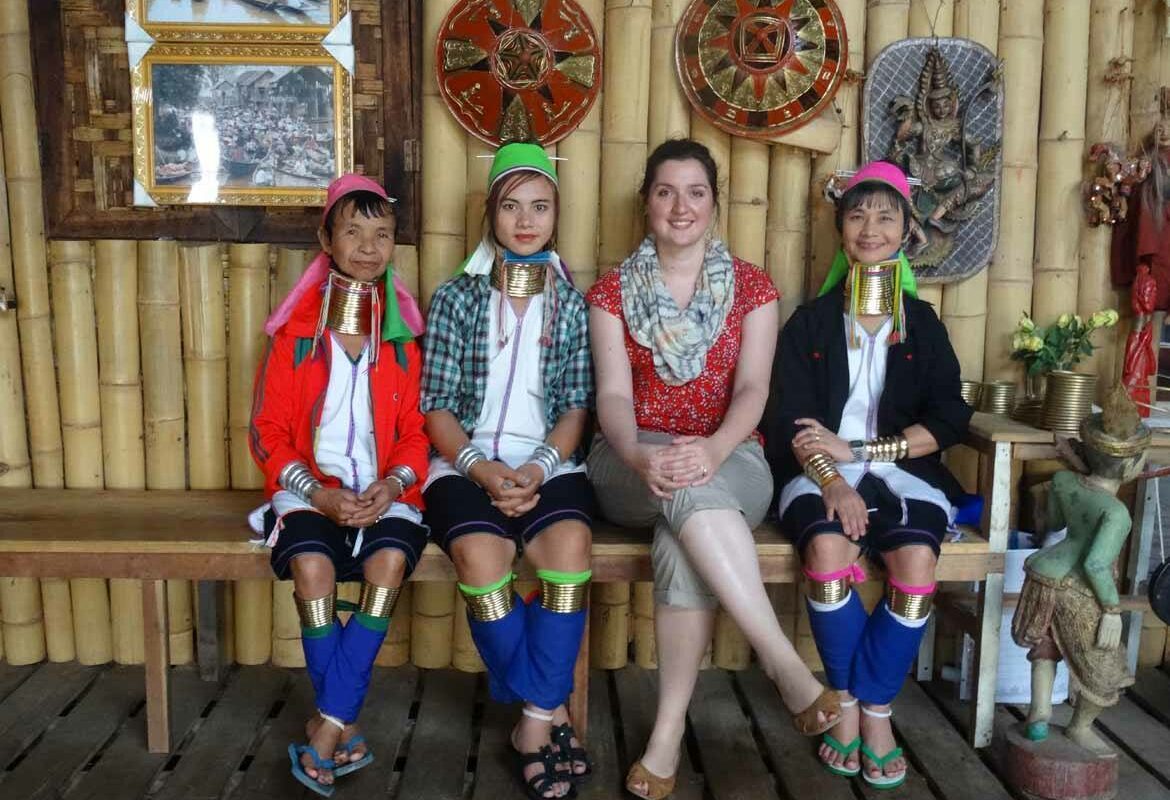 The Kayan: Ethnic minorities of Burma

This post is part of a series about Myanmar’s minority peoples. For an introduction, or to read more, see our post: The ethnic minorities of Burma.

The Kayan people belong to the Red Karen ethnic minority, and reside mainly in Shan State – Burma’s biggest state. About half as many live in Kayah State, and a few hundred more live across the border in Thailand.

Within the Kayan minority there are various different groups: the Kayan Lahwi (or Padaung), the Kayan Ka Khaung (or Gekho), the Kayan Lahta, Kayan Ka Ngan, Kayan Gebar, Kayan Kakhi and the Bwe people (or Kayaw). The most famous of these groups is the Kayan Lahwi, known around the world for their tradition of elongating their necks with brass rings.

The Kayan Lahwi and their brass coils

Kayan Lahwi – or Padaung – women begin wearing coils around their necks at around the age of five. Explanations differ as to why – some explain that the coils are to protect the wearer from tiger bites, others attest that they are intended to make the women less attractive to men from other ethnic groups, and still others claim that the coils are a mark of beauty and a sign of wealth. As the years go on, more and more coils are added until the neck appears extraordinarily long – but what most don’t realise is that the neck itself has not ‘stretched’. The effect is caused by the coils pushing down on the collarbone and compressing the ribcage, giving the impression of a much longer neck.

Kayan women rarely remove their coils except to replace them with longer coils. This is partly because the coil causes the neck muscles to weaken and bruises the area around the collarbone – but also because, over time, the women feel as though their coils have become a part of their body, and it feels wrong to remove them.

Not all women of the Kayan Lahwi minority wear coils today, and the decision of whether to wear them or not is complicated. The practice first began to lose popularity in Burma under the military regime, which banned many ethnic minority practices – such as tribal tattooing and neck rings – as part of an effort to ‘modernise’. The wearing of coils had no place in the government’s vision of a shared ‘Burmese’ cultural identity, and the practice was outlawed.

Though there are still Kayan people in Burma today, many fled across the border to Thailand, where they settled in refugee camps and became a tourist attraction, with busloads of visitors brought in to ogle them. The practice of coil-wearing actually gained popularity in Thailand for this reason – but while some Kayan have opted to make money as ‘giraffe women’, others have removed theirs in protest against the commodification of their culture. In some cases, the women who removed their coils had been wearing them for decades.

Though the Kayan are most famous for their neck rings, it is only a very small group who keep this practice – other Kayan peoples follow different traditions.

Kayan society is matrilineal, and their traditional religion, called Kan Khwan, is purported to have existed in its present form (more or less) since the Bronze Age. Kay Htein Bo is the name of their main festival, which celebrates the creation of the world, and no major decision is taken in Kayan society without some form of divination – usually the breaking of thatch grass or reading of chicken bones. Kayan mythology tells that god created the world by placing a stake into the ground, so Kay Htein Bo is celebrated with long ceremonial poles capped traditional ornaments, and chicken bones are used to tell the fortunes of the year ahead.

Though these religious practices still exist in some Kayan villages today, the majority of Kayan people now practice Roman Catholicism, having been converted by Italian missionaries in the 19th century.

Visiting the Kayan: is it ethical?

It is no secret that the Kayan have been exploited in the name of tourism, and it is not without justification that Kayan villages in Thailand have been called ‘human zoos’. So far, this phenomenon has yet to get a foothold in Burma, but care must be taken to ensure that tourism does not endanger the culture and dignity of the Kayan people.

If you are considering visiting a region of Burma where you might encounter Kayan people (or any other ethnic minorities), be sure to use a responsible tour operator and only travel with an accredited local guide. Your guide will not only ensure that you follow cultural etiquette, but will act as a bridge to the people you meet, giving you the chance to make a more meaningful connection with these communities. Whatever you do, don’t just turn up, take a few pictures, and leave. Ask permission before taking photographs, read up about the local culture, and stay longer than an hour or so if you can. There is nothing wrong with interacting with people from minority groups in Burma; but when they become just another check box on your bucket list, you’ve gone astray.

Our Hidden Trails of Burma itinerary includes a visit to Loikaw, home to the Kayan people. Get in touch with one of our travel consultants to begin planning your trip today.