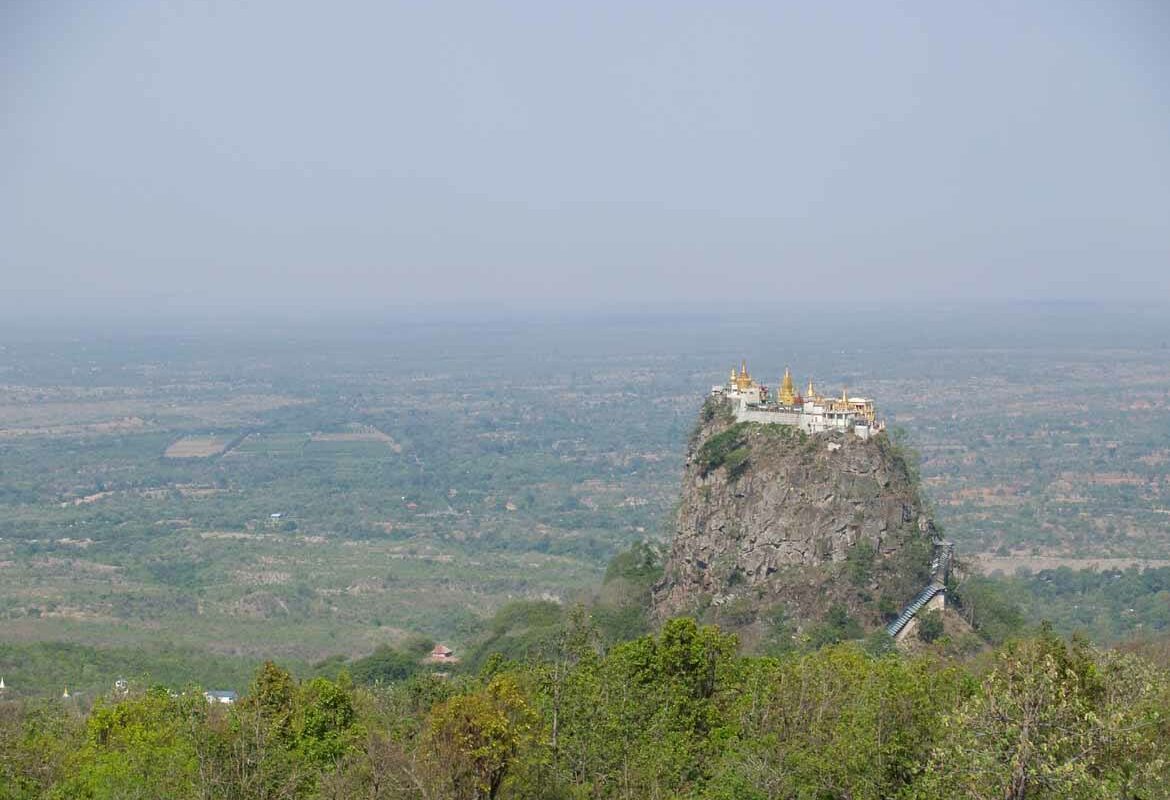 Burma is full of spectacular sights, but one of the most mind-boggling is just an hour’s drive from Bagan, on top of a volcanic plug in central Burma: Mount Popa.

Mount Popa sits in the Pegu Hills, watching over the plains of central Burma. Though the name technically refers to the volanco itself, it’s more usually applied to Taung Kalat – or “Pedestal Hill” – a steep-sided volcanic plug that stands at the foot of the mountain’s slope. To differentiate the two, the volcano is often called Taung Ma-gyi: “Mother Hill”.

A volcanic plug, or lava neck, is formed when magma hardens within a volcanic vent, plugging up the flow of molten rock from below. In some cases this can cause a build-up of pressure leading to an explosive eruption – but in the case of Mount Popa, the surrounding rock and earth has been eroded away, leaving Taung Kalat standing proud above the mountainside.

What’s so special about it?

Though remarkable in itself, Mount Popa is not just an interesting geological formation. Perched at the top of Pedestal Hill is a cluster of temples and monasteries relating to both Buddhism and the indigenous tradition of nat worship, making this a key pilgrimage site for the people of Myanmar.

Legend has it that the mountain sprang from the ground after a great earthquake over 2,000 years ago, and is the home of four of Burma’s “Great Nats”: a pantheon of 37 indigenous spirits that have been worshipped in Burma since before the arrival of Buddhism. There are various myths in Burmese folk culture that tell how these spirits came to live on Mount Popa – one tells that the nats were a brother and sister fleeing King Thinligyaung; another tells the story of an ogress who fell in love with the King’s flower-gatherer and became a nat after dying of a broken heart.

Burma is one of the most devoutly Buddhist countries in the world (the World Factbook has it that 89% of the population are practising Theravada Buddhists), so it may come as a surprise that the indigenous tradition of nat worship is still so strong.

When Buddhism arrived in Burma over 2,000 years ago, its practitioners found the locals already worshipping an animist tradition, which believed that spirits resided in trees, rocks and water – and had a rich tradition of associated stories. Instead of superseding this tradition, Buddhism absorbed it – to the extent that some scholars now argue that Buddhism and nat worship today are just two sides of the same coin.

The two systems continue to be worshipped syncretically in modern Burma, their beliefs and traditions seamlessly merged: hence it is no contradiction for Mount Popa to be home to both nat spirits and Buddhist monasteries.

Though it is primarily a pilgrimage site, Mount Popa is growing in popularity as a tourist destination too, and is very easily accessible from Bagan – as long as you don’t mind climbing a few steps! The only way to reach the temples at the top of Pedestal Hill is to climb a long stairway of 777 steps, so you’ll certainly have earnt the spectacular view by the time you reach the top. On a clear day, you’ll be able to see Bagan and the Irrawaddy River in the distance.

As you explore the temples & monasteries at the top of the hill, watch out for some very naughty macaque monkeys, who will have your camera, wallet and packed lunch in a flash given half a chance. It’s also recommended that you don’t wear red, black or green as this could offend the nats – and don’t bring any meat products with you as this can also make them angry. You’ve been warned.

Mount Popa is busiest with pilgrims during festivals on the full moon in May/June (Nadon), the full moon in November/December (Nadaw), and during Thingyan – Burmese New Year (April). Visits are possible year-round, but the weather is best from October/November until March/April.

Interested in making Mount Popa part of your Burma itinerary? Let one of our consultants know and they’ll be happy to craft a trip that exactly matches your specifications. Click here to get in touch and start planning now – or take a look at our Beautiful Burma Small Group Tour, which includes a trip to Mount Popa.