Vietnam’s Phong Nha National Park covers nearly 3,000 square kilometres of land in the country’s long, thin central region, and is home to some of the most spectacular caves in the world. And I do not say this lightly – these really are some absolute corkers.

But caves are just damp, dark holes in the ground, right? Why would you bother to take time out of your holiday to see those?

Wrong! Oh, so wrong. These caves are really, really cool. Here’s our guide to just a few of the very best.

Anyway. Son Doong is massive: it contains its own rainforest of trees up to 30 metres tall, with its own population of flying foxes, birds and monkeys. It’s about five times the size of nearby Hang En Cave, and its largest chamber is 200 metres high. That’s tall enough to house a 40-storey skyscraper – or two Big Bens standing on top of each other with a smidge of room to spare.

If you want to visit Son Doong, however, you’ll need to have very deep pockets. The first tourists visited the cave in 2013 at a cost of £2,000 per head, and prices have remained at about that level ever since. Perhaps it will become more accessible in the future but, what with ill-conceived plans to build whacking great cable cars through the middle of it, you’ve got to wonder whether it’d be better if it didn’t.

Paradise Cave was discovered in 2005, and is so-called because of its incredible cathedral-like stalagmite and stalactite formations. The cave is 31 kilometres long with caverns as high as 100 metres tall, and is three times larger than Phong Nha Cave – which was the park’s star attraction at the time of its discovery. Its limestone formations are also the most spectacular of any cave in the region, thoroughly eclipsing those at Phong Nha.

Tourists have been able to visit Paradise Cave since 2010, and you can drive right up to the entrance. On the one hand this accessibility is a boon, meaning you can easily visit the cave as a day trip, but it also means that it is far from peaceful – and during busy periods the local tour guides do tend to crack out the megaphones, which really does nothing for the experience. These minor gripes aside, Paradise Cave is truly magnificent – and the development of lighting and walkways in the caves has been very sensitively done. 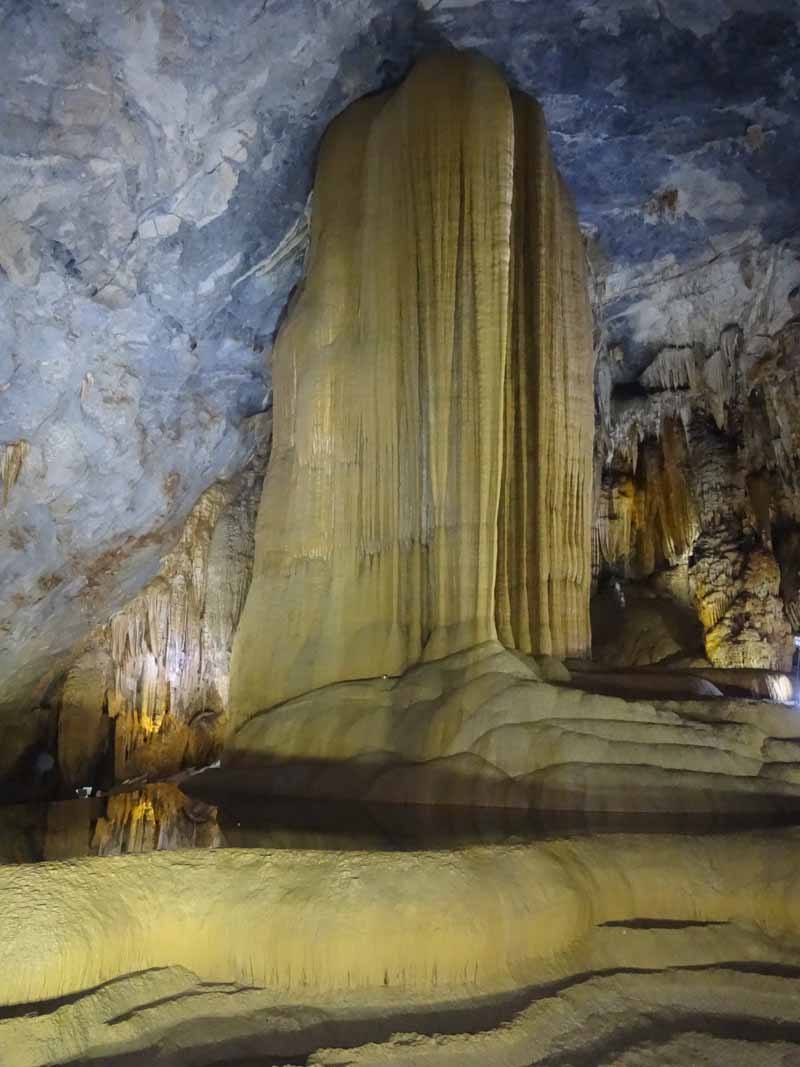 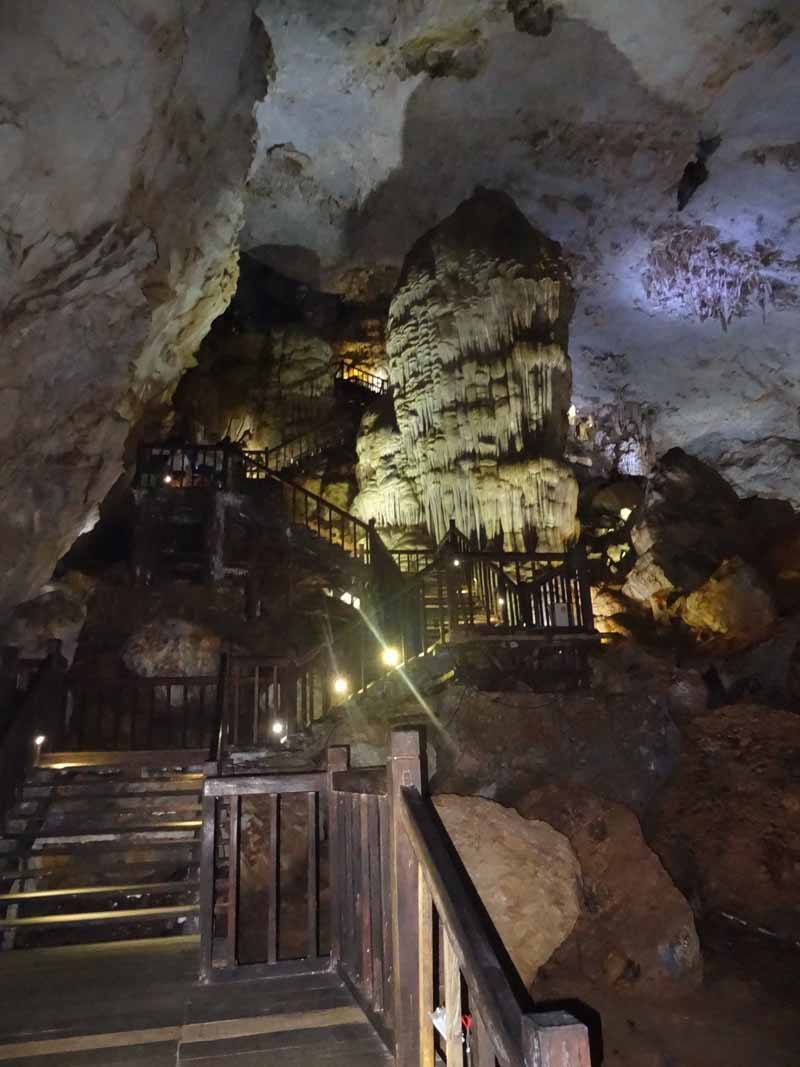 Phong Nha is the cave that lends its name to the national park, and is the most well-trodden of the region’s caves.

I feel rather sorry for Phong Nha Cave actually. With 14 grottoes, a length of 7,729 metres, and the longest underground river in the world, Phong Nha is still pretty impressive – but what with the glamour of newly-discovered Paradise Cave and world-record-snatching Son Doong, it has taken rather a back seat. It doesn’t help that Phong Nha was discovered back in the days when “sustainable tourism” consisted of funnelling as many visitors into it as humanly possible, which is all very well for the economy but does rather detract from the ambiance of a place.

But don’t discount Phong Nha just because of its flashier neighbours. As I mentioned before, it is still very impressive indeed – and it’s the only cave in the national park where you can float through it on a boat, making it accessible to just about every traveller.

Hang En was considered the largest cave in Vietnam until the discovery of Son Doong, and despite having lost that accolade, it’s still the third-largest in the world.

Hang En’s main cave could house a Boeing 747 (easily), and is one of the most photogenic of the subterranean chambers in the national park. Its mouth opens directly onto lush jungle, and shafts of light illuminate a golden, sandy beach at the edge of a turquoise pool. It’s no wonder that it’s featured as a location in this year’s film Pan, and is rumoured to have been used in the upcoming Star Wars trilogy (although I didn’t spot it in The Force Awakens, to my disappointment).

Unlike Paradise Cave or Phong Nha Cave, Hang En is only accessible after trekking for around ten kilometres through jungle, crossing rivers and scrambling up and down mountain slopes. This – as far as I’m concerned, at least – is a Very Good Thing, not just because it gives an excellent sense of adventure, but also because it means Hang En has avoided the crowds that flock to its more accessible neighbours. This doesn’t mean it’s as expensive as Son Doong, however: visitors can take a guided two-day trek to the cave (including camping on the beach inside!) for less than £200, which is well worth it.

The Tu Lan cave system is another adventurous route for travellers, and depending on how much time you have (and how much energy), trips can encompass a number of impressive caves, including Tu Lan, Hang Ken, Hang Kim, Hung Ton, and the intriguingly named “Secret Cave”. Each of these has its own particular attractions, whether it’s underground waterfalls, green pools, beautiful stalagmites and stalactites, or a combination of all of the above.

Like Hang En, the relative inaccessibility of the Tu Lan Caves (involving several miles of walking and a bit of swimming too!) means that a visit guarantees a sense of adventure that is somewhat lacking from the more impressive Paradise Cave. Guided tours are available from one to several days in the area, and cost from about £60 to over £400 depending on the length and difficulty you choose.

Last but not least – a little piece of Son Doong for those who can’t quite afford the price tag of Son Soong itself: Hang Va. Hang Va and the nearby Hang Nuoc Nut are technically part of the Son Doong cave system due to their shared water flow, and contain rock formations that are arguably even more impressive than those to be found in their roomier neighbour. These caves were only discovered in 2012, which means that you’ll be one of only a handful of people to have set foot inside them. Just like the Tu Lan and Hang Ken caves, visitors will need to be pretty fit to deal with tough hiking, river crossings, scrambling and trekking through the caves here – perfect for the more adventurous among you.

I could go on about caves for much longer, but not everybody shares my enthusiasm for dark holes in the ground so I’ll leave it at that. The five caves above constitute the most famous and interesting examples in Phong Nha National Park, and InsideVietnam Tours can help you organise all kinds of adventures to visit them – ranging from gentle one-day treks to multi-day odysseys of swimming, abseiling, climbing, bouldering and general poking around in dark corners. Just get in touch with one of our experts to find out more.