Skip to content
Thank you for signing up!
Subscribe to our Newsletter
HOME » Blog » Angkor Wat: Our guide to Cambodia’s national icon

Following on from our post about the spectacular plains of Bagan in Burma, we’re looking at the history and significance of Angkor – Cambodia’s greatest monument.

The vast temple complex of Angkor Wat in Cambodia is one of Southeast Asia’s most recognisable and revered religious sites. It has been the subject of countless wanderlust-inducing photos and if you’re interested in the Southeast Asian region, the chances are that it’ll feature quite high up on your travel bucket list. But how much do you know about this ancient icon? 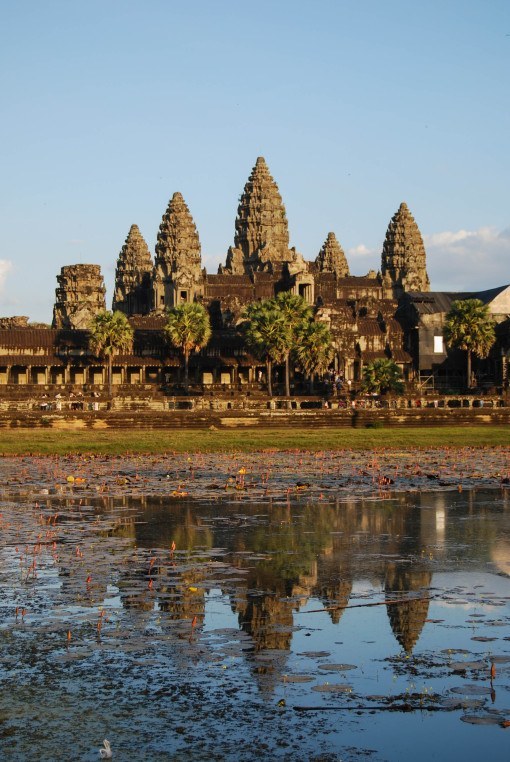 What?   Originally a Hindu temple complex dedicated to the god Vishnu; now a Buddhist temple. It is also the tomb of its creator, Suryavarman II.

Who built it?   Started by Khmer King Suryavarman II, finished by Jayavarman VII

What is it made of?   Mainly sandstone blocks, with some laterite

Angkor Wat is Cambodia’s most popular tourist destination and the country’s symbol, appearing on both its flag and its money – which is no surprise really, considering its staggering scale and intricacy. It is, in fact, the largest religious monument in the world – and has a greater volume than the Great Pyramid of Giza. 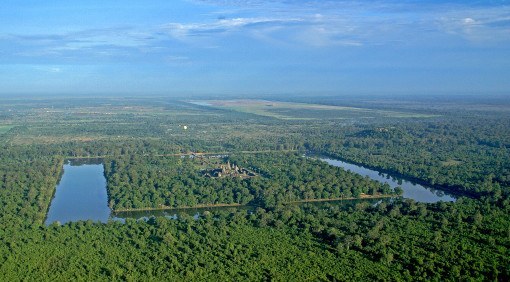 The temple complex combines two principles of Khmer architecture: the temple-mountain and the galleried temple, and features three ascending, concentric galleries with five towers at its centre. Admittance to each gallery would have been increasingly exclusive, with commoners allowed into the lowest level only and a sacred central sanctuary at the very top.

The temple is thought to have been built using a combination of elephants, ropes, pulleys and bamboo scaffolding and contains millions of tons of sandstone – which was quarried 40 km (25 mi) away from the site and transported using a canal network. To put that in perspective, the massive limestone blocks used to build the Egyptian pyramids was quarried barely half a kilometre from the site!

What’s more, nearly every single surface of Angkor Wat has been carved with literally miles and miles of bas-reliefs depicting religious figures, scenes from Indian literature, warriors, animals and celestial creatures. The skill, organization, time and manpower that would have been required to finish the project is simply immense.

Unlike most Cambodian temples, throughout its entire history Angkor Wat was never abandoned to rack and ruin. Early in its history it was sacked by the Chams in 1177, then in the 13th century it gradually moved from a Hindu place of worship to Theravada Buddhist use (which continues today).

Early European visitors to the site (such as Henri Mouhot) rhapsodised about the site’s amazing architecture, but found it difficult to believe that such a monument could have been built by the Khmers. Tragically, it was the very beauty of the Angkor site and other Khmer monuments that led directly to France invading Siam to take control of the ruins in 1863 – and they would not be restored to Cambodia until 1953.

The ruins underwent considerable renovations in the 20th century, which were stalled during the Khmer Rouge era before continuing in fits and starts from the late eighties until the present day.

As is always the case with a site of such historical importance and interest as Angkor, increased tourism brings with it both benefits and detractors. On the one hand, UNESCO recognition and higher footfall means more funding for renovations, but on the other it means more wear and tear, graffiti, potentially culturally insensitive tourists and harmful development in the surrounding area. Luckily, tourism has caused little damage to Angkor Wat so far, UNESCO has set up a wide-ranging programme to protect the ruins, and various conservation committees are involved in the discussion over how best to incorporate future tourism without sacrificing local values and culture.

Angkor Wat stands in Angkor Archaeological Park, which covers 400 square kilometres and contains the remains of several capitals of the Khmer Empire dating from between the 9th and 15th centuries. One of these capitals was the largest pre-industrial city in the world – covering an area larger than the size of modern Paris.

It is possible to reach Angkor in about 20 minutes by car or motorbike from Siem Reap – but we recommend renting a bike and cycling the 6km to the ruins. Bike rental outlets are generally open very early in the morning to cater to tourists who wish to do just this – and if you wish you can join a cycling tour that will take in a few of the most popular and lesser-known sites in the park. By helicopter or tethered hot air balloon are also amazing ways to see the ruins, if you have that kind of cash to spare.

Many visitors choose to arrive at Angkor Wat just before dawn (the park opens at 5am) in order to watch the sun rise from behind the temple. We recommend getting there as early as possible to stay one step ahead of the crowds!

Though the pictures may look peaceful, this is a very popular time to visit and you will certainly not be the only one lugging your camera down to get that perfect shot! There are two popular spots from which to photograph Angkor at dawn from across the pond, but the northwest corner of the northern pond is the better of the two. Near the end of March and September, at the equinoxes, the sun will rise directly above the central tower – creating an amazing photo.

Though you can never expect to get Angkor to yourself, one of the best times to look around is directly after dawn, when many tourists then head back to town for breakfast.We recommend taking in the galleries before climbing the tower – most tourists will charge straight to the top of the temple right off the bat.

When you do come to climb to the summit, remember that there is an enforced dress code (you must cover your shoulders and knees – and not just with a sarong or scarf). Also be sure to check before you climb, as the summit is often closed for religious holidays.

Itching to see Angkor for yourself? As well as seeing this incredible complex, our Cambodia Small Group Tours explore the country’s most magnificent temples.