Burmese food tends to get a bit of a bad rap from the travelling community, and with such illustrious neighbours as Thailand, India, and China (acknowledged custodians of three of the world’s most mouthwatering cuisines), it has some very tough acts to follow. Being sandwiched between these three culinary monoliths, however, does also mean that Burmese cuisine has been shaped by a diverse range of influences, and each of its neighbours has left its mark.

While it’d be hard to argue that Burmese food is on par with Indian or Thai for richness and variety, for those who know where to look, it can be absolutely delicious. As demand increases, we’re sure we’ll see more and more good restaurants opening up across Burma – but in the meantime, one of the great benefits of travelling with InsideBurma Tours is that we can point you in the direction of our favourite spots, where Burmese cuisine is served the way it should be!

For those heading out to Burma soon, we’ve put together a short guide to the country’s favourite dishes – so you’ll have at least some idea of what to order the first time you sit down with a menu. 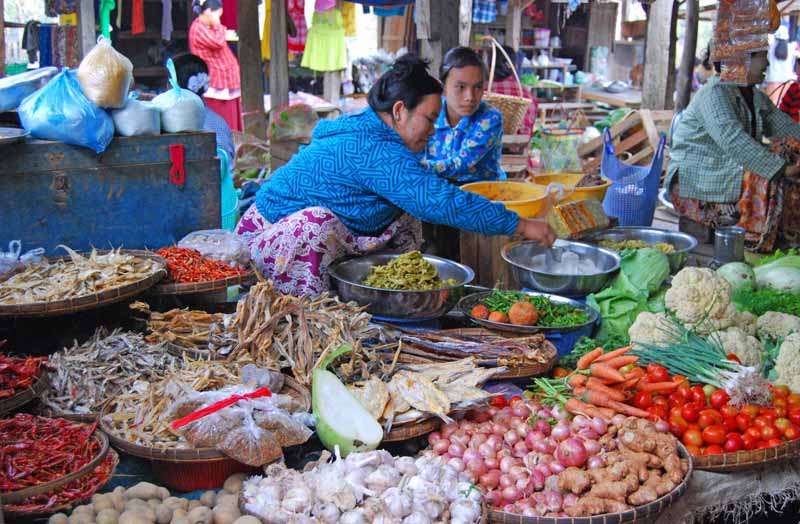 Lahpet, or fermented tea leaves, is one of Burma’s most famous delicacies. In fact, Burma is one of only a few countries where tea is eaten as well as drunk, and it plays a social role as a peace offering. Lahpet was traditionally consumed to seal a court verdict, and is still eaten by some Burmese people after the settling of a dispute.

You are most likely to come across lahpet in a Burmese tea leaf salad, in which the sour, slightly bitter leaves are mixed by hand with shredded cabbage, sliced tomatoes, crunchy deep-fried beans, nuts and peas, a splash of garlic oil, and pungent slices of chilli and garlic. To those who weren’t weaned on handfuls of leaves, it may sound daunting – but we think it’s delicious!

Burmese cuisine displays influences from within as well as without, and you will come across many dishes inspired by the cooking traditions of Burma’s ethnic minority groups. One such dish is known as Shan rice, or nga htamin in Burmese, originally a traditional food of the Shan ethnic group but now popular throughout Burma.

Shan rice consists of rice, potato and tomato cooked with turmeric and moulded into a bowl shape, then topped with freshwater fish cooked with onion, garlic, and chilli.

Those who don’t cope well with spice can breathe a sigh of relief in Burma, where the curries are milder than in any other Asian country. Curry is the central element of many meals in Burma, and will usually be based around some sort of meat, fish or seafood. Some travellers complain that Burmese curries are too oily, but this is due to the way the curries are traditionally cooked: so that the oil separates from the other ingredients and rises to the surface, forming a protective layer over the cooking pot and sealing in the flavour. Since most of the oil sits at the top, it is actually quite easy to avoid if you should want to. A well-prepared, fragrant Burmese curry is actually utterly delicious, and we think that it doesn’t get the praise it deserves.

Once you’ve made your choice of curry, the dish is accompanied by a seemingly never-ending succession of side dishes – from rice to tart salads, fried, boiled or fresh vegetables, soup, herbs, and dips.

Mohinga is Burma’s unofficial national dish, and is traditionally served as a breakfast dish. The dish consists of fine, round rice noodles served in a hearty, herbal fish-and-shallot-based broth, often supplemented with the crunchy pith of the banana tree. Ginger and lemongrass are often used as flavourings. One member of the InsideAsia team even cites starting the day with mohinga as his favourite thing about travelling in Burma, and endorsements don’t come much higher than that!

For many Westerners, the thought of eating what we might think of as “dinner food” at breakfast time is anathema, so you’ll be pleased to hear that mohinga is available from street vendors throughout the day.

The Burmese love “dry” noodle dishes – which are essentially noodle-based “salads” with broth served on the side. Perhaps the tastiest and most ubiquitous is nangyi thoke, made with thick, round rice noodles, chicken, thin slices of fish cake, parboiled beansprouts and slices of hardboiled egg with a squeeze of lemon or lime.

We hope that this briefest of introductions has left you hungry to begin sampling the delights of Burmese cuisine! Our website contains more information relating to Burmese culinary traditions, as well as a section on dining etiquette and customs.