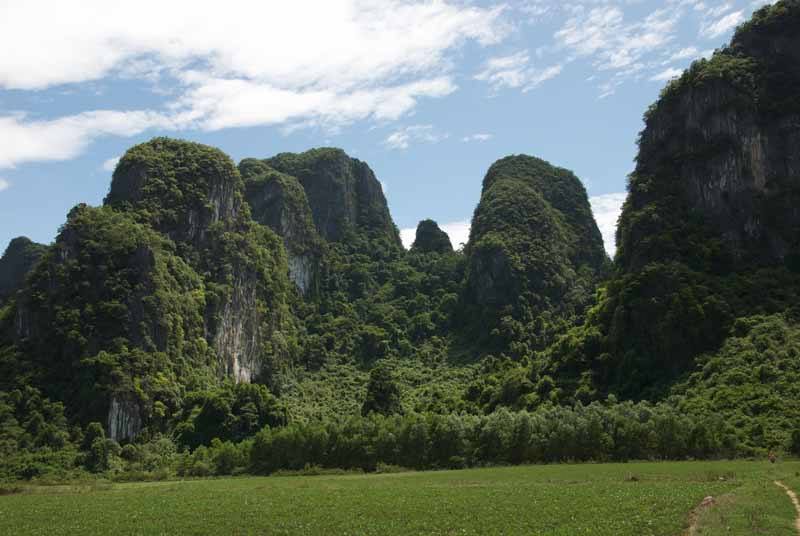 Indochina – that is, Vietnam, Cambodia and Laos – has a collection of 12 World Heritage Sites, ranging from Khmer Empire masterpieces to colossal caves, from imperial cities to vast national parks. InsideVietnam Tours customers can visit the best of them on our World Heritage Indochina Self-Guided Adventure, but if nothing but the full set will do – if you really have to catch ’em all – then read on…

In terms of quantity, Vietnam may have the lion’s share of World Heritage Sites – but it’s Cambodia that really has the big guns, and there’s no bigger World Heritage gun than the Angkor Archaeological Park: home of Angkor Wat.

You might have heard of Angkor Wat. Built over a period of 30 years in the early 12th century, the Hindu-turned-Buddhist temple needs little introduction. It is the largest religious monument in the world, the national symbol of Cambodia, and is covered in miles of some of the world’s finest carvings. Most people think it’s pretty cool.

Though Angkor Wat is the undisputed centrepiece of this archaeological treasure trove, the Angkor World Heritage Site extends over 400 square kilometres (150 sq mi) and encompasses hundreds of temples dating from the 9th until the 15th century – including the giant faces of The Bayon, the overgrown ruins of Beng Mealea, and the “Tomb Raider Temple”, Ta Prohm.

Located in central Vietnam, Hue was the seat of Vietnam’s last royal dynasty from 1802 until 1945. During this period it served as the political, cultural and religious capital of Vietnam, and the Nguyen Emperors built a complex of palaces along the banks of the Perfume River.

Though many of Hue’s monuments were damaged or destroyed during the Vietnam War, those that survived remain as a superb example of imperial Vietnamese architecture.

Hue is also home to Vietnam’s largest international festival, and the 2016 dates have just been announced!

One of Vietnam’s most recognisable and evocative landscapes, Halong Bay in the north of the country was named a natural World Heritage Site in 1994 for its “outstanding scenic beauty” and “great biological interest”. The bay lies in the Gulf of Tonkin and is renowned for its plethora of over 1,600 limestone islands and islets, many towering hundreds of metres out of the water below.

The best way to experience the scenery of Halong Bay is on a cruise – and there are lots of options out there. Check out our blog post for tips on choosing the best cruise for you.

Luang Prabang was recognised by UNESCO in 1995 for its uniquely well preserved blend of traditional Lao architecture with European colonial style. Built on a peninsula jutting out into the Mekong and the Nam Khan Rivers, the city is surrounded by lush mountains and has a laid-back, tropical atmosphere beloved by all travellers lucky enough to stop here.

From one of our favourite Asian towns to another, the ancient trading port of Hoi An is next on our World Heritage list. This beautiful town in central Vietnam became a UNESCO-listed site in 1999 for its colourful mish-mash of buildings, most of which survive from the 15th-19th centuries and exhibit influences from all over Asia and beyond.

While visiting Hoi An, be sure to escape the tourist crowds during the daytime by exploring the quiet suburbs and beautiful surrounding countryside – then head back into town as it comes alive for the night markets. Check out our recent photoblog for some inspiration!

In the same year that Hoi An received recognition from UNESCO, the ruins of My Son – located just a short distance outside the town – were also inscribed on the World Heritage list. The ruins of My Son, whilst nowhere near the size and scope of Angkor in Cambodia, are one of the last vestiges of the Hindu Cham culture that dominated the region from the 2nd until the 15th century, and the remaining ruins represent over 10 centuries of continuous development.

Another remnant of Indochina’s ancient Hindu heritage is Vat Phou, a temple complex in the Champasak Province of Laos. A geometric complex of temples, shrines and waterworks extending over 10 kilometres, itis not as well-preserved or extensive as the monuments of Angkor, but is very much worth a visit.

The limestone cave systems in the national park are so extensive that explorers are still discovering them today. The largest, Son Doong, was only discovered in 2009, while the famous “Paradise Cave” was discovered in 2005. Check out our blog post from January this year for more information.

The second of Cambodia’s two World Heritage Sites is Preah Vihear, another Hindu temple complex built in the early 11th century during the height of the Khmer Empire. Due to its remote location, the site has been remarkably well preserved and is much less frequented by tourists than its more famous cousin, Angkor Wat.

Built in the 11th century, this Imperial Citadel was constructed by the Ly Viet Dynasty to celebrate their independence from China, and served as the regional capital for almost 13 uninterrupted centuries. UNESCO has earmarked this site for its unique fusion of architectural styles from China in the north and Champa in the south – two formative influences on what would become traditional Vietnamese culture.

11. Citadel of the Ho Dynasty, Vietnam

Though rather less remarkable to the untrained eye than most other locations on this list, the Citadel of the Ho Dynasty was selected for inclusion on the World Heritage list as an example of a new and innovative style of Southeast Asian architecture. Incorporating new building techniques, geometric city planning and aspects of Confucian philosophical concepts, the citadel is evidence of a transitional period in Vietnamese history, as traditional values made way for new technologies and commerce.

Last but certainly not least, the most recent location in Indochina to be recognised by UNESCO was inscribed only last year, and is the only site on the list to claim both cultural and natural World Heritage status. The Trang An Landscape Complex is known for its spectacular landscape of flat valleys and towering limestone peaks – earning it the nickname “dry Halong Bay”.

Not only is the scenery spectacular, but the area’s caves and mountains contain evidence of human culture over a continuous period of more than 30,000 years.