With Burmese New Year just around the corner, we thought that now would be a great time to cover a little of the history of Burma’s biggest festival – and let you know what to expect if you find yourself caught up in the festivities!

Thingyan, which marks the transition of the sun from Pisces to Aries, is Burma’s anything-goes celebration of the new year. Unlike countries like Vietnam and China, where the new year is based on a solely lunar calendar, Theravada Buddhist countries like Burma celebrate a new year based on a lunisolar calendar (in which months are based on lunar months and years are based on solar years) – meaning that celebrations fall in mid-April every year. These days, Burma’s Thingyan celebrations are fixed to the Gregorian calendar and occur on the 13th to the 16th of April every year.

Thingyan came to Burma by way of India, where it originated as a Hindu festival. During the three-day festival period, Burmese people believe that the king of the nats (Thagyamin, identified with the Buddhist deva Sakra and the Hindu deity Indra) descends to earth from the spirit realm and tallies the good and bad deeds of mankind over the past year. Rather like in the run-up to Christmas in the Western world, children are told that if they have been good their names will be taken down in his golden book, and if they’ve been bad they’ll end up in his dog-skin book (slightly more gruesome than a “naughty list”, but there you go).

Nats are the traditional spirits of Burmese indigenous religion, and although Burma has been a predominantly Buddhist country for many centuries now, a large proportion of Burmese still practise nat worship alongside Buddhism. 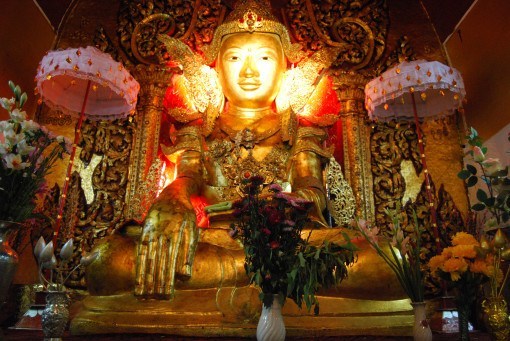 The first day of festivities is Thingyan Eve. On this day, Buddhists are expected to observe the Eight Precepts (that’s three more than the usual five!), meaning that they can only consume food after sunrise and before noon, they must abstain from overindulging in sleep or lazing around, they must not wear perfume, cosmetics or jewellery, and they must not sing, dance or play music. Not much fun, you might think!

By the evening, however, festivities have begun in earnest – with song and dance performances as well as festival floats making the rounds. Women wear thanaka paste on their faces and yellow padauk flowers in their hair, while men perform songs called than gyat – in which they criticise and poke fun at anything that is wrong in Burma at the current time. This is one of the only times that a blind eye is turned to criticism of the Burmese government, corruption and general societal ills.

On the day after Thingyan Eve, called, a-kya nei, Thagyamin arrives in town. A cannon is fired in the morning, at which signal people emerge from their houses to place offerings of flowers and leaves outside their doors and to pour water on the ground in prayer.

It is today on a-kya nei that the Burmese engage in the most famous of Thingyan rituals – chucking loads and loads of water at each other. Everybody apart from monks and pregnant women are considered fair game, as bucketloads of water (sometimes icy!) are thrown in streets up and down Burma. Foreigners are not exempt, so you can expect to get pretty drenched during the course of the festival! Though the main purpose these days is to have a bit of fun, the act of water-throwing symbolises the washing away of sins in preparation for the new year.

After a-kya nei is New Year’s Day proper, when Burmese visit their elder relatives to perform a ritual hair-washing. On this day, Burmese people may make new year’s resolutions and perform good deeds (such as donating extra-tasty food to monks) in order to start storing up merit. Catching fish and releasing them into lakes and rivers is another tradition on this day.

Shinbyu is the Buddhist ceremony whereby a young Burmese boy comes of age by entering a temple as a novice monk for a short period of time. Though only a few boys will remain to become fully fledged monks, nearly every Burmese boy enters a monastery for at least this short amount of time between the ages of seven and 20.