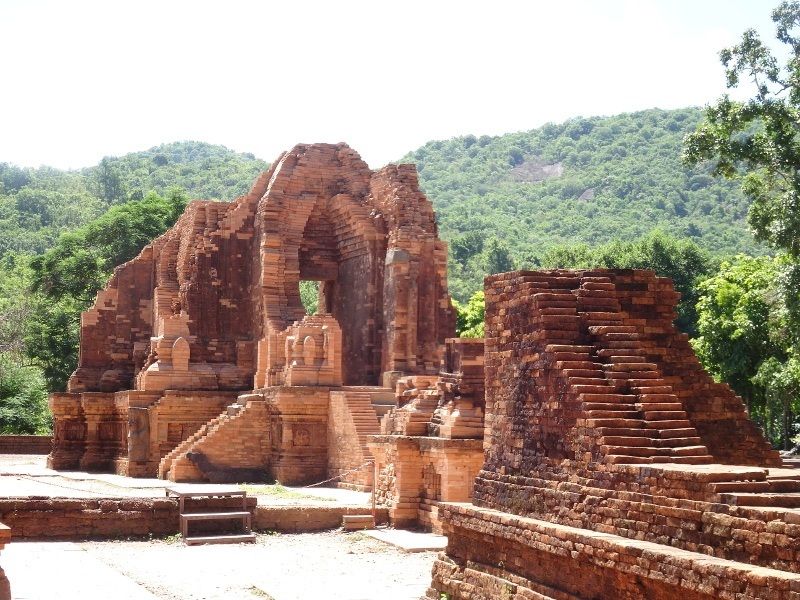 Such is the overwhelming ascendancy of Buddhism in Southeast Asia today that few people know much about the region’s Hindu past. In actual fact, ­Hinduism came to Indochina much earlier than Buddhism, and its legacy survives in Vietnam most vibrantly in the beautiful UNESCO World Heritage Site of My Son.

This post will give you a bit of historical background on My Son and the ancient Cham civilization who built it, as well as an overview of its present condition and some tips on how best to visit the site today.

Where?   In the Duy Xuyen District of Quang Nam Province, central Vietnam.

What?   The religious centre and sometime capital of the Champa Kingdom, which ruled modern-day south Vietnam from AD 192 until the kingdom’s decline and obsolescence by the 15th century. The monuments themselves consist chiefly of religious sanctuaries, tombs and temples dedicated to Hindu deities such as Shiva, Krishna and Vishnu.

Who built it?   The ruins of My Son represent over ten centuries of development carried out by successive generations of the Champa Kingdom.

How big is it?   According to UNESCO, My Son consists of eight groups of monuments comprising a total of 71 individual structures. In total, the site occupies an area of just 1.42 square kilometres (0.55 sq mi).

The Champa Kingdom is usually dated from AD 192, when the ruling Dua Clan unified the various Cham clans in central and southern Vietnam to form a single state. Under the influence of Hinduism from India, the Cham people (whose descendants survive as an ethnic minority in Vietnam today) developed a rich culture in which indigenous and external influences were combined – including elements from the Buddhist faith as well as from neighbouring cultures such as the Khmers and the Chinese.

The fortuitous location of My Son in a small valley surrounded by high mountains meant that it was favoured by successive kings between the 6th and 8th centuries, and by the later 10th century, most of the impressive monuments still extant at My Son had already been built. In the 11th century the site suffered damage during a long period of continuous warfare, before King Harivarman IV finally made peace and took the throne in 1074, beginning a period of restorations and repairs.

From 1190 until 1220, the Champa Kingdom was occupied by the Khmers of neighbouring Angkor, whose army (under the direction of King Suyavarman II, the founder of Angkor Wat), sacked My Son and destroyed many of its temples. Subsequently, the Champa Kingdom went into a long period of decline, all but disappearing out of existence by the end of the 15th century. The latest surviving inscription to be found at the site of My Son is to King Jaya Indravarman V in 1243.

Following the fall of the Champa Kingdom to the Viet, My Son was largely forgotten and fell into disrepair over the course of the ensuing centuries. In 1898 the complex was rediscovered by a Frenchman named M. C. Paris, and work began by French scholars and archaeologists to study the site’s inscriptions, art and architecture. Their report, published in 1904, continues to underpin scholarly understanding of the area today.

In the past century, My Son saw restoration works carried out by French scholars in 1937, then again between 1939 and 1943, and in 1999 it was designated a UNESCO World Heritage Site, with 440,000 USD allotted to its preservation and upkeep. US carpet bombing in 1969 caused a great deal of damage to the area, however, and unexploded land mines surrounding My Son have beset efforts at renovations and tourism alike.

All but one of the monuments at My Son are built out of fired red brick (temple B1 is the exception, made from stone), with stone pillars and decorative sandstone bas-reliefs.

Since the construction of the My Son sanctuaries took place over the course of many centuries, there are many different architectural styles and construction techniques to be found here – some having survived in better condition than others. Art historians have identified six distinct architectural styles at My Son, spanning every period from the 8th until the 14th century.

In terms of construction techniques, not a huge amount is known about how the Cham fired their bricks, made their mortar and executed their impressive carvings. One hypothesis poses that the buildings may have been built from partially fired bricks before being hardened by fire in their entirety – although some scholars refute this idea. These questions pose challenges for renovators, who must use what little information they can glean to keep their restorations true to the original style of the buildings.

In addition to impressive carvings of scenes from Hindu mythology, the surviving buildings of My Son are decorated with written inscriptions in both Sanskrit and old Cham, documenting political and religious subjects such as the foundation of a new temple or the gift of treasure to a god.

Despite considerable damage during the Vietnam War, My Son represents a well-preserved and very authentic – if rather overgrown – archaeological site, unique amongst tourist spots in Vietnam. If you’ve recently visited Cambodia’s Angkor Wat or Burma’s Bagan plains, you may find My Son somewhat underwhelming! Nevertheless, the surrounding jungle scenery is lovely, and if you are interested in the ancient history of Vietnam you will find plenty to be fascinated by here.

My Son is easily accessible from Hoi An or Danang, both of which are fantastic places to visit and feature very frequently on our Vietnam itineraries. As it is quite a long journey (at least one hour) from Hoi An and there is little signage onsite, we recommend visiting with a private guide and driver to get the most from your visit. The best times to go are generally either early in the morning or later afternoon, when the tour bus crowds have dispersed somewhat and the weather isn’t quite as sweltering as it is in the middle of the day.

To read more about the archaeological wonders of Southeast Asia, see our guide to the temples of Bagan, our top ten things to do in Luang Prabang, or our highlights of Angkor Wat!