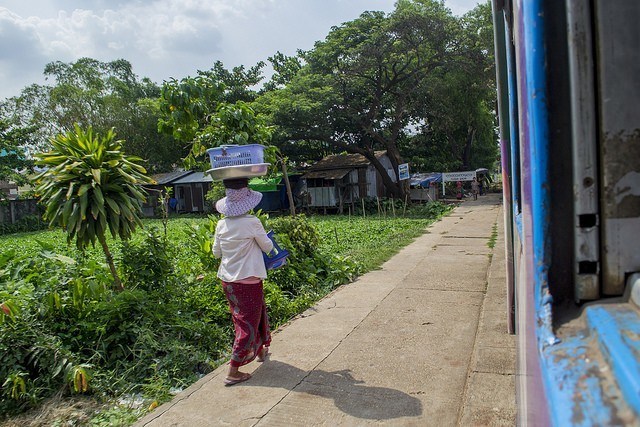 On Yangon’s circle train, the journey is the destination. Buy a ticket and clamber aboard; peer out of the window and, nose to the breeze, see what life is like beyond the glitz of the city.

Myanmar’s former capital, Yangon, is full of things to see and do – from its impressive collection of colonial-era architecture to its sacred golden stupas. But the most interesting thing about the city isn’t its grand buildings or religious sites, but what goes on in between: the hustle and bustle of everyday life in the ‘burbs.

Luckily, it’s easier than you might think to get a sense of the rhythm of daily life in and around Yangon. All you need to do is hop on the train…

Yangon’s circle train was built by the British colonists in 1954, and as Kate and I discovered in May this year, not a huge amount has changed since then.

The tracks are overgrown with weeds, the stations are run-down to the point of dilapidation, and the trains themselves are… well, let’s just say they’re not exactly hi-tech.

In fact, they’re downright rickety, trundling along at barely more than walking pace, with hard, bench-style seating, chipped paintwork, and a bone-shaking clatter that leaves you feeling rather rattled after a couple of hours on the tracks.

Nevertheless, riding the circle train is often touted as one of Yangon’s top attractions – so of course we couldn’t leave without seeing what all the fuss was about. Here’s how we got on…

Going round in circles

We boarded the train at Phaya Lan Station, just next to Bogyoke Aung San Market in the city centre. After buying a 200 kyat ticket from a small boy sitting at a table (the ticketing system is evidently about as hi-tech as the railway itself), we jumped on board the first train to roll through the station.

One thing we immediately noticed was that, unlike in European countries, nobody here cares if you walk on the tracks. In fact, the rails are usually swarming with people trying to get on and off the train – and the reason for their hurry soon became apparent: the train doesn’t actually stop at any station. It slows down just enough for those on the platform to fling themselves and their baggage in through the open doors, and since most of the passengers are on their way to buy or sell something in town, there is often a lot of baggage.

The locals take this all in their stride, however. At busier stops everybody helps each other to load and unload (expect to lend a hand if you’re anywhere near the door!) and depending on what time of day you ride, you might find yourself with a big sack of market produce between your knees, a food vendor dangling something tasty under your nose, or (as happened to me) somebody trimming herbs and vegetables over your shoulder. You’ll soon realise that space is something of a foreign concept here!

Watching the world go by from Yangon’s circle train

Our train soon left the built-up city centre, and we watched as concrete apartment blocks gave way to reed-built villages, and paved roads became dirt tracks. Soon we were passing through a landscape of tropical woodland, pink hibiscus flowers, tall reeds, hanging vines and farmland, with labourers working waist-deep in the paddy fields.

We passed through scenes that were close enough to touch: groups of people gossiping; children playing board games in the street; chickens scratching in the dirt; dogs and cats prowling; washing lines full of clothes drying in the sun. We peered into cafés, caught glimpses of markets, spied on football games, and waved at kids on bicycles.

Unfortunately it wasn’t all rosy. Alongside the picturesque villages and countryside scenes, the smelly rubbish heaps and trash-clogged waterways were hard to ignore. But unsightly though they were, these were reminders that what we were seeing was the real Myanmar: unprimped, unpolished, and still very much in the throes of progress. It was impossible to be bored.

It’s not just the view through the window that’s fascinating: the interior life of the train is, if anything, even more interesting to watch than the scenery outside.

Throughout the three hours we spent riding the rails, the stream of food and drink vendors passing through our carriage never stopped for a moment. It was possible to buy everything from thanaka (a white-coloured paste used as a cosmetic) to ice lollies, and from fruit and vegetables to unidentifiable fried objects. We spotted boiled quail’s eggs, spiced nuts, and all sorts of interesting-looking treats that I couldn’t put a name to. You could even munch on a cricket if you felt so inclined.

Kate and I got on the circle train intending just to ride for an hour or so, and ended up enjoying it so much we stayed for the whole three. If you’re in Yangon, don’t miss it! A ticket costs 200 kyat (about 11p) and is good for the whole 29-mile loop, so you can get on and off as you choose.

Clamber aboard Yangon’s circle train and snag yourself a window seat on our Burma Unmasked small group tour.