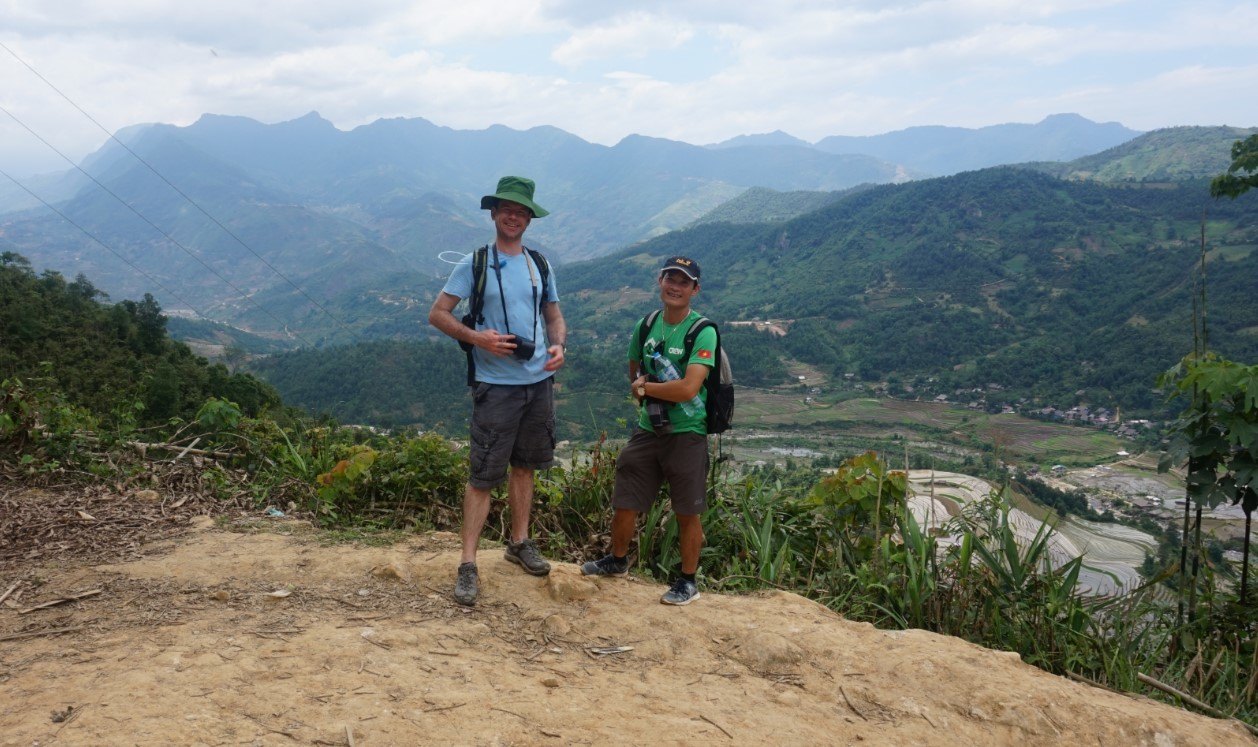 Diary of a hiker: 48 hours in Sapa, Vietnam

Katy’s hike into the Sapa mountains saw her touched by the kind hospitality of strangers, and in awe of the spectacular landscape.

Oh my, what a place! After an evening performance of frogs and insects calling to each other, I woke to views from the balcony of hazy mountain peaks, and hillsides covered in cascading terraces of rice seedlings.

After breakfast we were met by our hiking guide Mr Tien, a gentle, kind and extremely fit man. He returned to his home village after university to follow in his family’s footsteps, and now works both as a farmer (his water buffalo is his prize possession) and a tour guide. As a local to the area, he speaks many of the dialects and knows a lot of the local people. As well as a few hidden paths…

At the exit to one of those hidden paths we entered a wide valley of rice terraces with ladies busy planting. Mr Tien called over and asked if I could help. Pulling off my walking shoes and socks I was straight in there wading through knee-deep clay-water! I was instructed to separate a small amount of rice seedlings in one hand and push them into the water so that the roots made contact with the clay earth beneath, and the seedling tops poked out above the surface. The objective was to make nice straight lines.

This is not an easy task for the uninitiated.

At times I planted too deeply, other times too shallow, and most of the time in uneven lines. Unsurprisingly my progress was significantly slower than the experienced locals. In this region every rice plant feeds the locals planting it – this really puts their patience with me handling their precious crop into context.

Lunch with the locals in Sapa

Whilst walking barefoot across the hillside (looking for somewhere to wash away the mud from our feet and legs), Mr Tien spotted some local farmers enjoying lunch under a bamboo shelter on stilts. One of their daughters had recently got married so they were celebrating with a feast and invited us to join.

Rice wine was passed around as well as a bamboo leaf parcel of purple and white sticky rice and green beans. We also tried a special dish of congealed pig blood seasoned with cardamom and eaten with chopsticks – a fairly tricky feat!

When I asked Mr Tien what impressions the group had of England, he translated my question to the group and laughed. They had never heard of England, but all knew of Manchester United!

Back at the hotel in Sapa

Mr Tien described today’s trek as a gentle walk. As I write this evening I can feel it in my muscles! I’ve taken a Red Zhao Herbal Bath to make sure I’m in top condition for tomorrow’s full day hike on steep remote mountain paths.

The day started with a breakfast of fresh crepes and waffles. We set off as soon as our porter, a young lady called Van, arrived to carry our lunch and lead the way to her home village, 10km away. Following an arranged marriage, she had moved away to live with her husband’s family and was rarely allowed back to visit her parents. Working as a porter was an opportunity for her to earn some money and see her parents after two years apart.

Van looked to be a slip of a girl, but carried our provisions in a conical wicker basket strapped to her back. I lifted it and discovered that it weighed about 30kg – not much she told me! As we walked, farmers smiled, often stopping work for a few moments to watch us; Mr Tien explained that foreigners are still relatively unknown to them. Children were delighted to call out “hello”, and if close enough the braver ones high-fived us.

The heat could have made walking extremely difficult, but we were fortunate to have a reasonable amount of cloud cover. Mr Tien also occasionally stopped in the shade to produce something delicious from Van’s basket. One such treat was a home-grown watermelon; I don’t think I’ve ever tasted something so refreshing!

After a couple of hours, Van’s mother came into view. Excited at the prospect of being reunited with her daughter, she came from her village to meet us. We walked dusty paths filled with lazy dogs, chickens, ducks, pigs, cows, water buffalo and goats to reach her farm house. I greeted one boy wearing a Manchester United football top with “Hello Manchester” and he beamed at me.

At the house, great excitement ensued when I asked for a photo. It was interpreted as a formal family portrait, so Van’s parents disappeared behind a screen to dress up! I snapped them as they lined up in front of the house; Van’s mother in traditional dress, and her father in his best shirt and trousers.

As they waved us off, her mother said that they had never had tourists in their home before. I really hope we made a good impression.

Tonight we will travel by sleeper train back to hectic, humid Hanoi, but I suspect that the memories of our two days walking in the tranquil Sapa Mountains will stay with us for a long time.

Meet villagers and make the most of Vietnam’s natural beauty on our Golden Vietnam self-guided itinerary. Stop in the natural wonders of Sapa, Halong Bay and the Mekong Delta. and chat to our travel experts about tailoring a trek to Sapa.