In the last post in this series on elephants, I gave a brief introduction to the debate surrounding the ethics of elephant tourism. You can read my post here. This week, I’ll be looking into some specific tourism activities available across Asia, so that you can make an informed decision as to which practices to support.

As I discussed in my last blog post, what is and isn’t OK when it comes to elephant tourism is a very grey area. There is surprisingly little reliable information available to the general public, making it hard for tourists to decide whether a given experience is ethical or not.

As Richard Lair, one of the world’s most well-respected elephant conservation experts, has explained:

The loss of work for elephants would not be a problem if the unemployed animals would exit gracefully, if they were led home to quiet retirement in an idyllic village or perhaps even set free in the wild. Unfortunately, the precipitous decline in jobs brings to elephants not a life of ease but a life of awesome new threats. Too little work creates fierce competition for what work there is, and the resultant low pay leads directly to abuse of elephants through overwork.

Unfortunately, the best approach  is not always the most obvious.

What does an elephant feel?

What hurts and what doesn’t? What’s uncomfortable and what isn’t? You might think such questions have obvious answers, but I was surprised by the results my research yielded.

It’s easy for a soft-skinned human to assume that elephants can’t feel much in the way of touch, due to their massive bulk and tough, thick hides. When I’ve seen mahouts hitting their elephants with sticks in past, I always assumed that it didn’t hurt because the elephants did not react.

In actual fact, elephants’ hides are packed with nerve endings and are very sensitive, as gentle touching is an important part of social bonding in elephant communities. According to Elephant Experts, an elephant can respond to the touch of a feather – but captive elephants have been trained to suppress expressions of pain for fear of further punishment. This is the reason domestic elephants don’t react when hit by their mahouts.

Elephant rides are the most common elephant tourism activity, and feature on many a traveller’s bucket list. In the past, I thought of riding an elephant in the same way as I thought about riding a horse – that is, I didn’t really think about it at all.

I was surprised to discover that elephants’ skeletons are actually poorly adapted to carry any more than their own weight. I had supposed that even four or five passengers (as you often see at tourist centres) would be as nothing to such a large animal, but it seems that I supposed incorrectly. The use of a heavy howdah (a seat, or saddle, which perches in the centre of the elephant’s back) can cause health problems in later life – including nerve damage and chronic inflammation of the spine.

Walking on hard, tarmac surfaces can also cause excessive abrasion to the bottom of the feet, which are much better suited to walking on soft terrain, leaving the elephant with reduced padding on the soles of its feet. This in turn makes walking painful.

Most conservationists suggest that riding an elephant is not necessarily unethical if it is done in the right way, but many people argue that it’s unnecessary and shouldn’t be done. If you wish to ride an elephant, it’s best to perch on the elephant’s neck – as you’ll often see mahouts doing – as this will not cause physical harm to the animal. Also be sure that the elephant you are riding is well looked-after, that it only gives rides for a short period each day, and that it has constant access to shade and water. For more information on how to spot mistreatment, click here.

Elephant baths are another popular tourist activity in Southeast Asia, and can be done well or badly.

As long as the elephant is allowed to move around freely while in the water, is not made to bathe for longer than it wants, and is not overcrowded by visiting tourists, there is nothing wrong with elephant baths as a tourist activity.

What causes discomfort for an elephant is if it is made to lie very still on its side, which puts pressure on the lungs and internal organs, or if it is scrubbed with a stiff brush, which can be painful for sensitive elephant skin. Many mahouts and tourists are unaware of this, so the practice continues even at elephant centres that are otherwise responsible.

There are various places across Southeast Asia where you can see elephants paint pictures, though they’re mostly found in Thailand. Several years ago, a Thai relative took me to see one such show – and the spectacle of an elephant painting a self-portrait is pretty amazing, to say the least.

A quick Google search for elephant painting returns plenty of blogs and websites sounding off against the practice. Common reasons for disapproval are that painting elephants are trained using pain-based methods such as bullhooks and hidden nails; that it encourages mahouts to wean young elephants from their mothers too early, which can be dangerous and distressing; that the specially adapted paintbrushes (which are inserted into the trunk) are uncomfortable to use; and that it’s an unnatural activity that elephants would not engage in in the wild. The last is most certainly true, and the others may well be true in some cases.

On the other hand, some conservationists support the practice if done correctly. Richard Lair, the eminent elephant conservationist (whose UN-commissioned book, Gone Astray: The care and management of the Asian elephant in domesticity can be read online here) has been closely involved in the AEACP – or The Asian Elephant Art & Conservation Project – which sells art by elephants to raise funds for their upkeep. A single auction of their artwork at Christie’s in New York allegedly raised $75,000 for elephant conservation in 2000 – with one painting sold for $2,200.

The AEACP use all funds raised to improve living conditions for domestic elephants and to educate mahouts on humane training methods, and they assert on their website that “we do not tolerate any abuse of the elephants either while painting or in everyday interaction”.

Each traveller must weigh up for his or herself whether the funds raised by elephant painting justify the practice. We do not endorse any kind of pain-based training, and recommend that you thoroughly research any elephant painting venue before you travel to ensure that they are using humane techniques.

Elephants play a role in festivals across Southeast Asia – such as the Sayaboury Elephant Festival in Laos. Started by the charity Elefantastia, the festival was inaugurated to raise awareness of the plight of elephants in Laos – a country formerly known as “The Land of a Million Elephants” – but after control was handed over to the local government, unethical practices crept back.

The Sayaboury Elephant Festival raises awareness of elephants among Lao people, which is an important function that ought not to be taken lightly, but as noise and crowds are distressing for elephants and it’s likely that pain-based training continues under its auspices, we do not support or recommend this event.

Zoo quality varies wildly from country to country and from zoo to zoo. In general, however, it is very difficult for zoos to meet the natural requirements of elephants, who typically live in large and complex social groups and range over hundreds of kilometres in the wild.

Zoos that make an effort to provide elephants with a spacious environment, simulate foraging habits, and generally keep the elephants well occupied and looked after, are better than many alternatives – but not as good as sanctuaries that can provide a much larger space to roam.

If you would like to see elephants while in Cambodia, we can recommend the Phnom Tamao Wildlife Rescue Centre, where all the animals have been rescued from poachers or abusive owners and are looked after carefully and sensitively.

It barely needs mentioning that a circus is no place for an elephant – or any other kind of animal, for that matter. Elephants are particularly susceptible to joint problems due to their massive weight, and training them to adopt unnatural postures (such as standing on their front or back legs) is never a good idea. Circuses also cannot provide even close to adequate space for elephants to roam, and pain-based training will nearly always be their first recourse. The message is clear – don’t support them! 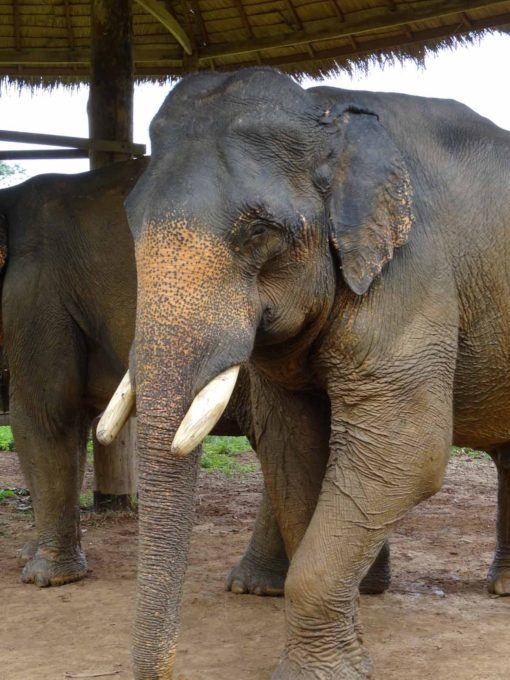 When making a decision about whether or not to support certain elephant tourism activities, it’s important to take a wide view of the situation and not to condemn those whose methods we disagree with. It is nearly always a lack of education or a desperate need for funds that is to blame for substandard conditions or questionable practices.

The best that we, as travellers, can do is to make our objections known and withdraw our support from establishments that do not conform to animal welfare standards, in the hope that this will lead them to change their methods for the better.

To find out about the elephant conservation centres that we support, have a look at the wildlife experience page of our website (for wildlife experiences in Burma, click here). In the final post in this series, I’ll be looking at elephants themselves – and what makes them such amazing creatures!