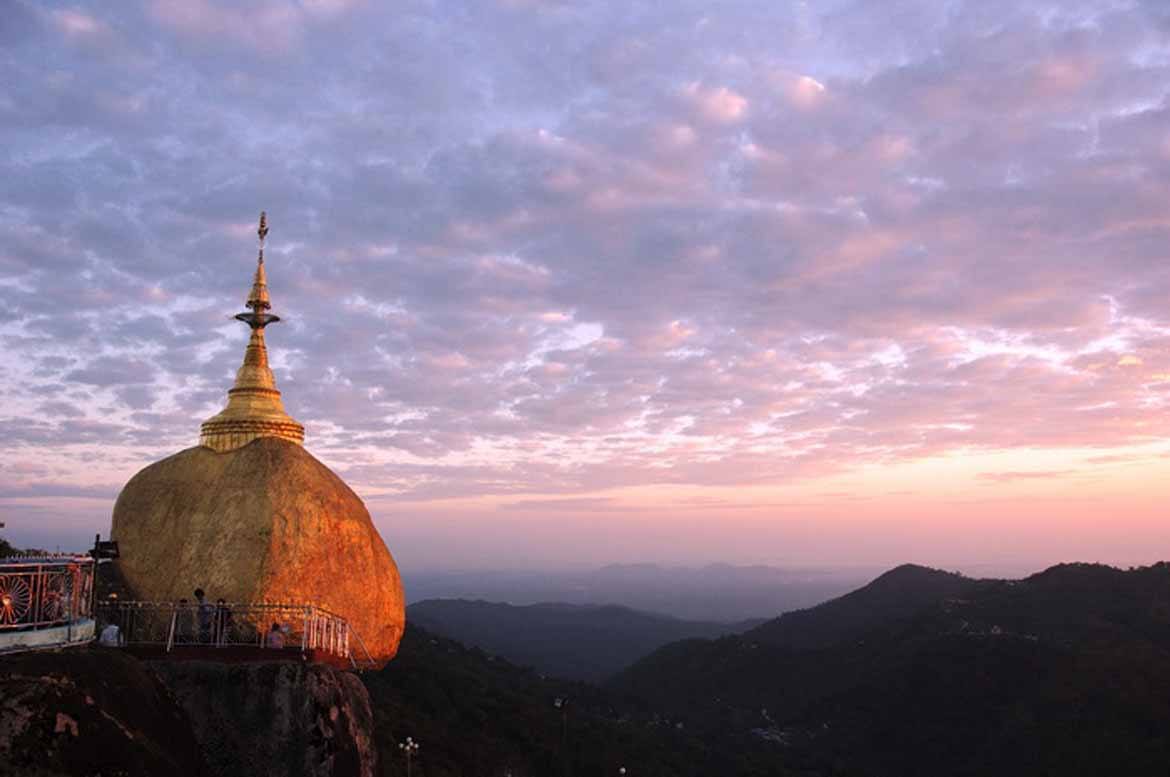 As Burma only recently opened its doors to international tourism, many of its most beautiful locations remain little-known to the outside world. These are just six of Burma’s surreal, wanderlust-inducing wonders – how many have you heard of?

Burma’s famous Golden Rock is easily one of the most unbelievable sights in Burma – if not the world. This 7.6-metre-high, gold-encrusted granite boulder teeters on the edge of a precipice atop Kyaiktiyo Hill, 1,100 metres above sea level – but as precarious as it looks, it doesn’t seem to be going anywhere soon. Nobody can say how long it’s been there, but legend has it that it balances on top of a strand of the Buddha’s hair. And because the Burmese simply can’t resist a good pagoda, there’s a golden stupa perched atop it.

The Golden Rock is accessible in around five hours by road from Yangon, and you’ll need to hop in the back of an open-topped truck to make the final ascent to the summit. Spend the night on the mountain and be sure to catch the rock at sunrise and sunset, when it glows ethereally in the half-light.

Not that impressed? Look closer…

Built by an eccentric Burmese king in the late 18th century, Mingun Pahtodawgyi is a bizarre sight. King Bodawpaya began construction on this huge monument in 1790, using thousands of slaves and prisoners of war, but allegedly abandoned the project because someone made a prophecy that he would die on its completion. The pagoda never was completed – today it stands at one third of its planned height – but Bodawpaya died anyway.

Today it stands on the banks of the Irrawaddy River, about 10 kilometres from Mandalay, with great cracks through it caused by an earthquake in 1839.

Ever fans of building things in precarious places, the Burmese just couldn’t resist building a temple on top of Taung Kalat – a sheer-sided, rocky column projecting 737 metres out of the middle of the surrounding plains. It’s often referred to as Mount Popa, but in fact this is the name of the volcano that created it. Taung Kalat itself is what’s known as a volcanic plug: distinctive rock formation caused when a column of magma hardens inside a volcanic vent and the surrounding earth is eroded away.

Today, visitors to Taung Kalat will find a Buddhist monastery at its summit – complete with its own population of fairly forthright monkeys (flaunt your packed lunch at your peril). It’s located around an hour’s drive southeast of Bagan, so it’s pretty easily accessible for most tourists and makes a fantastic addition to any itinerary! Just beware the 777 steps to the top…

If the first rule of Burmese religious architecture is “make it gold”, the second is surely “build it big” – and they don’t come much bigger than the Laykyun Setkyar – the Giant Standing Buddha of Monywa. (As impressive as it is, this Buddha is actually only the third-tallest statue in the world; the tallest is the Spring Temple Buddha in China, and the second-tallest is the Ushiku Daibustu in Japan. But it’s still pretty darn big).

The Laykyun Setkyar stands at 129 metres tall and took 12 years to complete. It has 31 floors to symbolise the 31 planes of existence, and at its feet lies a gigantic reclining Buddha – 101 metres long and 18 metres tall. Oh, and it’s gold, of course.

Monywa is well worth a visit – we recommend slotting it in between Bagan and Mandalay. 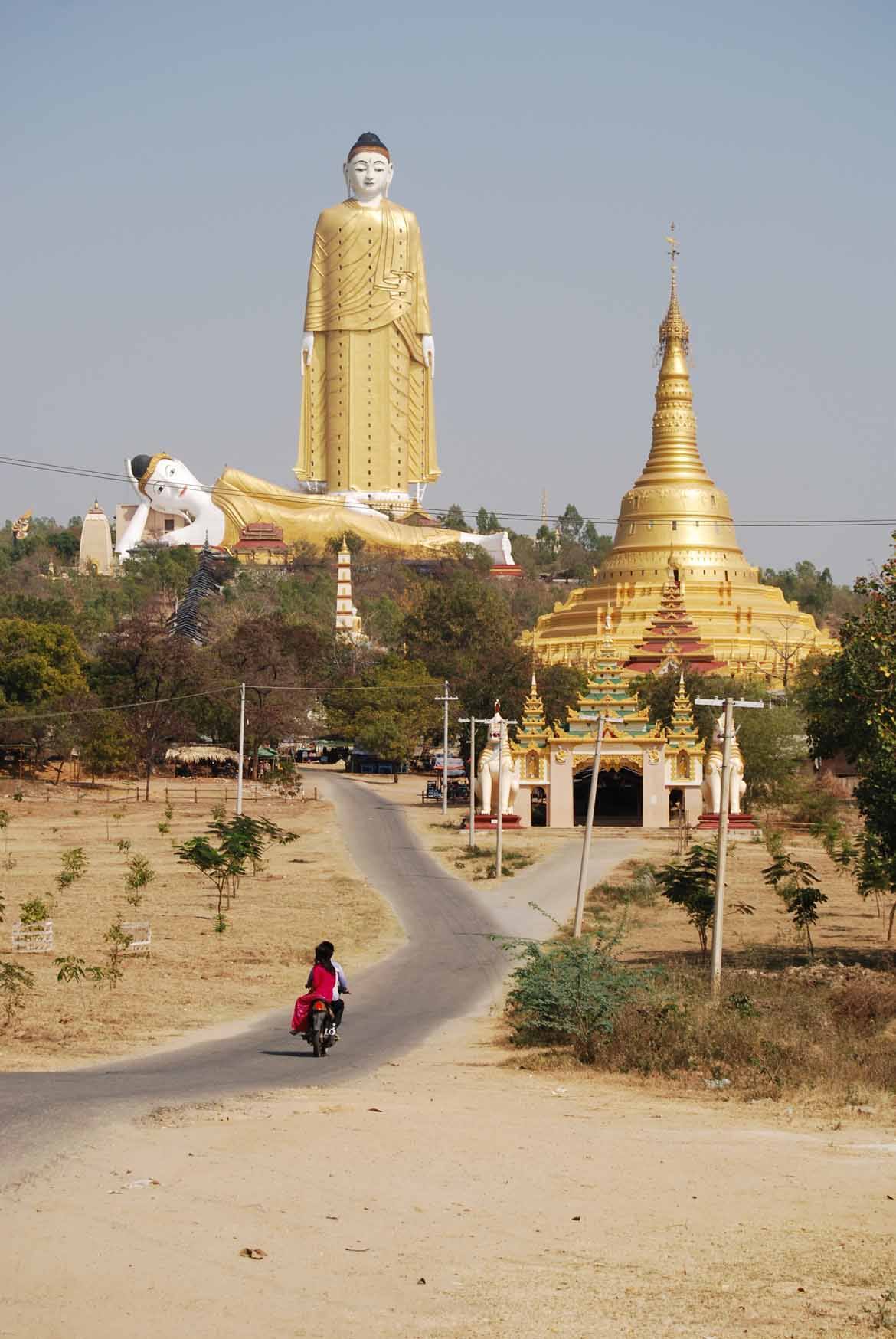 A perilously balanced rock at the centre of a lake? Yep, you guessed it – the Burmese built a pagoda on top of it.

Kyauk Ka Lat Pagoda lies at the middle of a pretty man-made lake near Hpa An, and its existence rather beggars belief. The limestone pinnacle on which it sits rises high above the surrounding water, tapering to an improbably narrow neck at the bottom and looking almost as precarious as the famous Golden Rock (itself only a relatively short distance away, so easily combined).

Hpa An is a great place to visit as it’s also home to Mount Zwe Kabin, where rows of thousands of identical Buddha statues lead the way to Kaw Gun Cave – and impressive grotto packed with (what a surprise) thousands more Buddha statues.

And finally – a place that needs little introduction: the Plains of Bagan. Do I really need to explain what makes this place so unbelievable? With over 2,500 temples and stupas scattered over a 100 square kilometres, this is quite simply one of the most bewitching landscapes in the world.

Read more about why Bagan is incredible here.

Inspired by these incredible places? We can organise a tailored trip to include any or all of these destinations. To get you started, our Kipling’s Burma itinerary combines the Golden Rock, Kyauk Ka Lat, Bagan and Mandalay (from which it’s an easy day trip to Mingun). Get in touch with our Burma experts to find out more.