Skip to content
Thank you for signing up!
Subscribe to our Newsletter
HOME » Blog » Réhahn’s Vietnam highlights

French photographer Réhahn has been living in Vietnam for eight years. Known as ‘the photographer who captures the soul of his subjects’ and inspired by the likes of Steve McCurry and Sebastião Salgado, he’s currently working on his Precious Heritage project, an ambitious mission to photograph members of all 54 of Vietnam’s ethic groups, which he expects to complete in 2019. Travelling by motorbike, he has journeyed all over Vietnam, from the Mekong Delta and the Central highlands to the mountains and valleys in the north.

Here, he picks out his personal highlights from his photographic adventures across Vietnam. 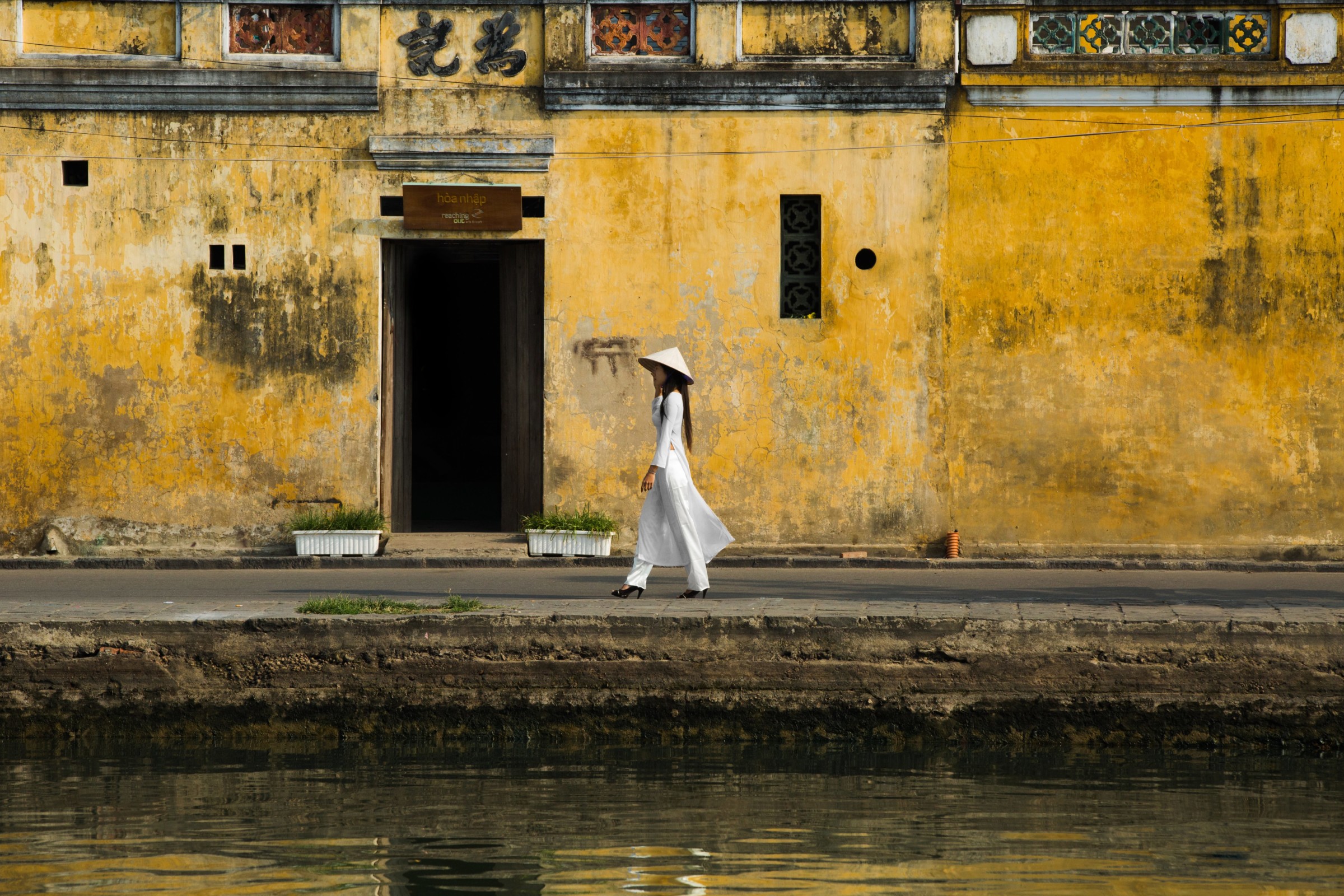 Hoi An has been my home since I moved to Vietnam in 2011. It’s a small city on the central coast of the country, surrounded by rice paddies and the beach.

They call Hoi An the ‘Yellow City’. It’s a protected UNESCO World Heritage site. A lot of the buildings from the French colonial period have been very well-preserved, and you also see architecture influenced by the Chinese, Japanese and more.

For me, it’s an open-air studio. The light and the yellow walls as backdrops provide fantastic photographic possibilities. There’s always a lot of activity in the morning around the central market, with fruit and vegetables on display and people eating in the streets, especially students.

I have my Precious Heritage Art Gallery Museum here in Hoi An, which contains my photos of Vietnam’s tribes, as well as tribal costumes and artefacts I’ve been given. 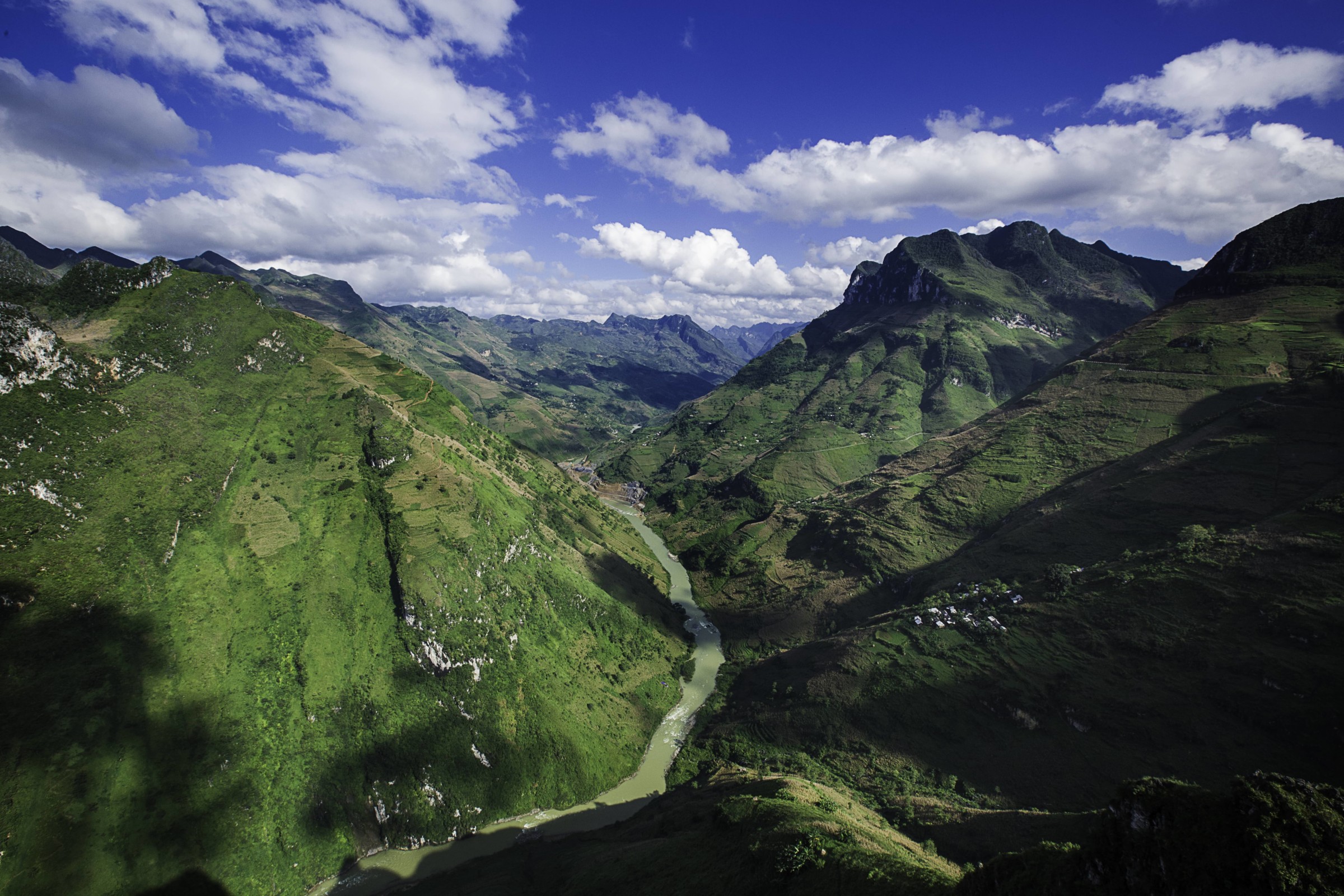 Living in Vietnam has given me the chance to work on my long-term project and to really explore the country. I only drive motorbikes here and it gives me a feeling of freedom I’ve never felt anywhere else, setting out on my bike to visit new places and meet new people. I never know what I’m going to find.

Ma Pi Leng is one of the highest mountain passes in Vietnam. The road from Meo Vac to Dong Van is called the ‘Happy Road’ by the locals. It’s around 20 kilometres long, and links up the towns of Dong Van and Meo Vac. I love riding my motorbike there and stopping at the top to admire the valley below. The scenery is incredible, with winding roads, towering mountains and green valleys. It’s a ‘must do’ for any travellers exploring the northern region of Vietnam. 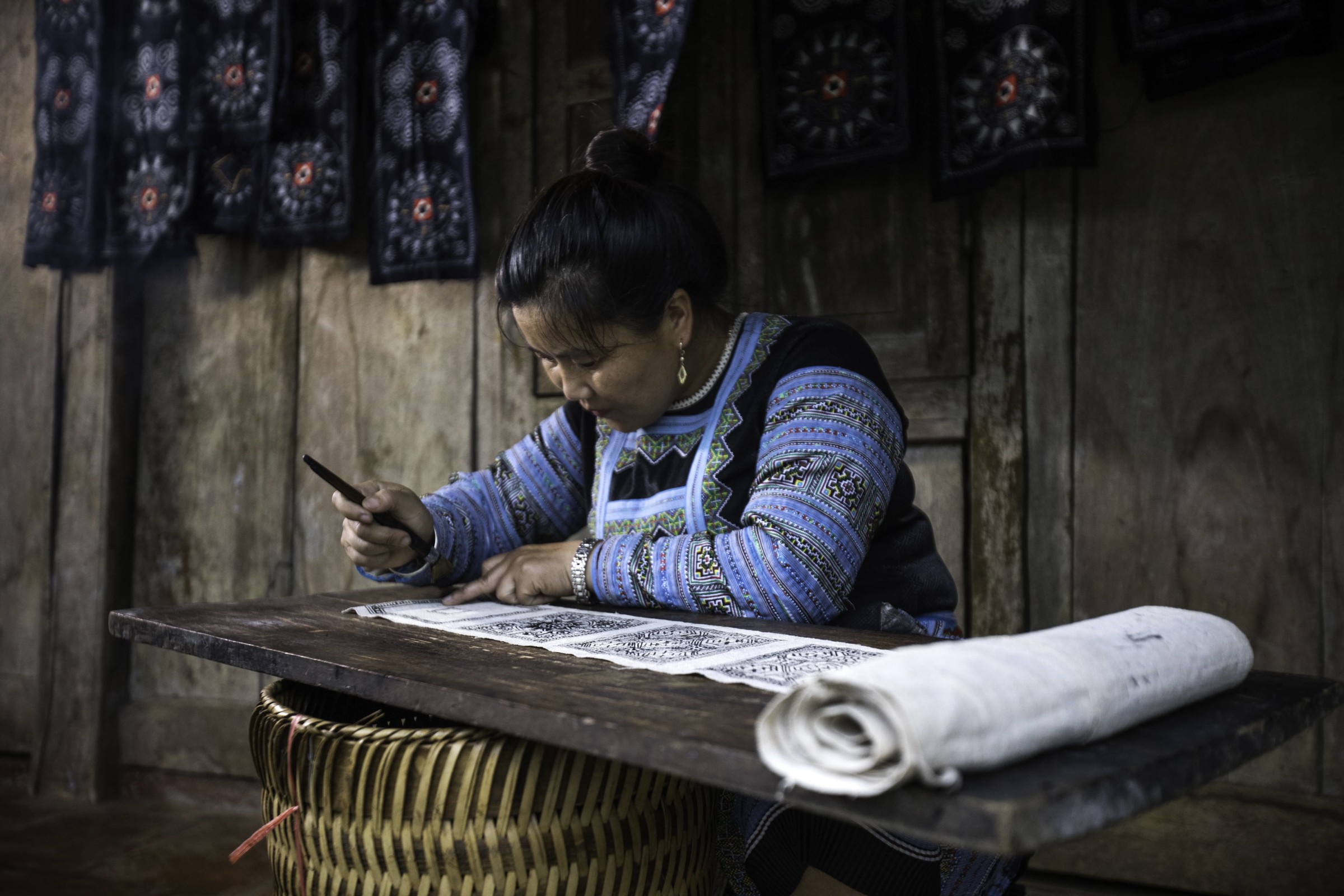 One of my most memorable experiences from travelling around Vietnam was getting to try making Batik with the Hmong people in Pa Co village, up in the north of Vietnam. Batik is a textile technique that consists of drawing on hemp fabric with beeswax. The Hmong decorate their traditional costumes with this ancient technique. It’s such a fascinating process and the patterned textiles look very beautiful.

You can pick up examples of Batik at local shops or markets, but it’s also possible to have a go yourself, which is a really cool experience. Anyone heading up to the north of Vietnam to visit the famous Halong Bay should take a detour and go to meet the Blue Hmong for a Batik workshop. 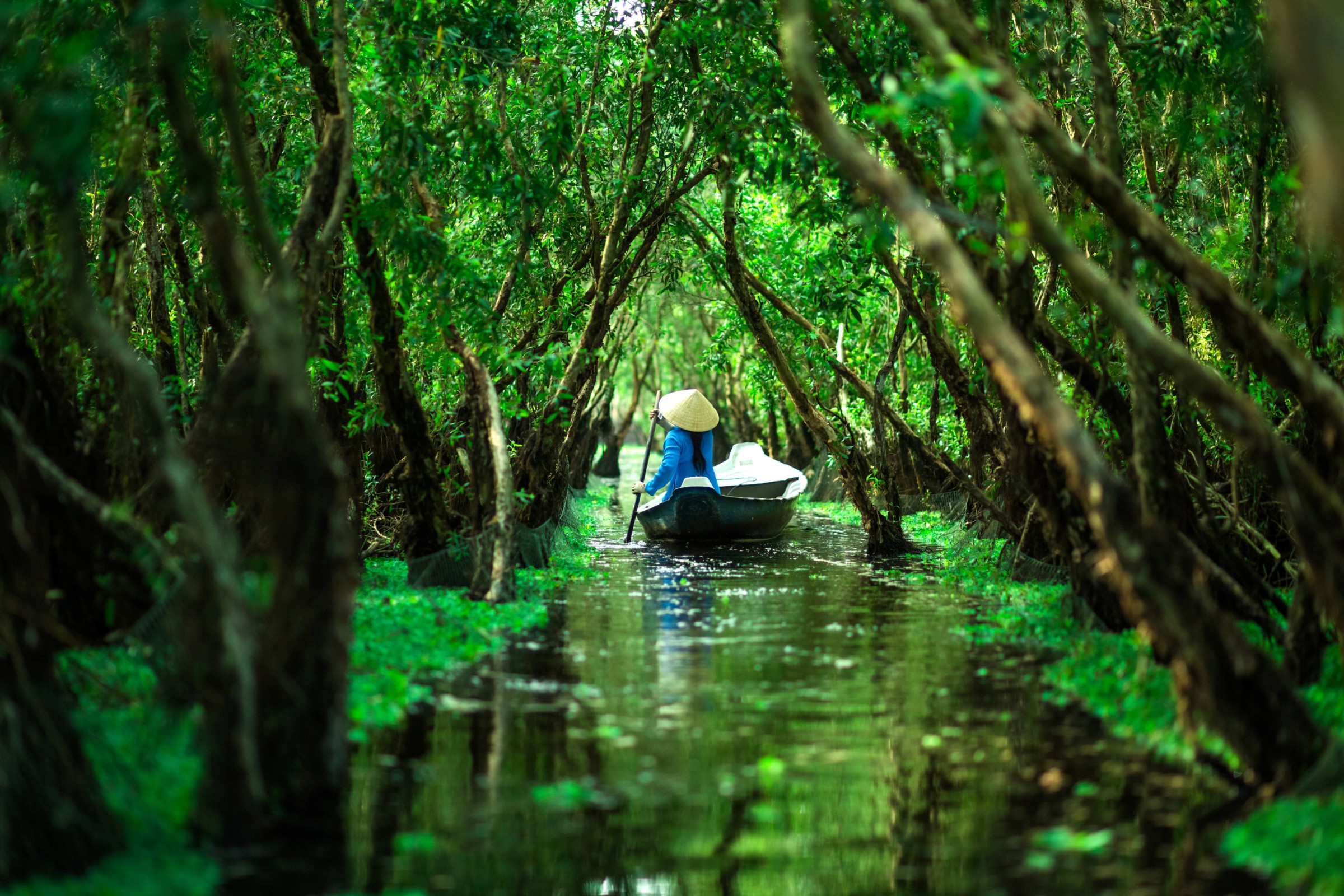 Tra Su is a massive area of mangrove forest and swamp with many colourful birds and animals, around 30 kilometres from the town of Chau Doc, down in the south of Vietnam and close to the Cambodian border. It’s a peaceful place in the Mekong Delta with almost no other tourists. The area has special palm trees you can’t find anywhere else in the country.

I’ve spent my last eight years in Vietnam working on my Precious Heritage Project to photograph all 54 of Vietnam’s ethnicities. It’s taken me all of this time to find 51 of the country’s 54 tribes. I discovered Tra Su by chance when I was looking for the Khmer ethnic group. I love to spend time there, exploring the local villages and waterways. 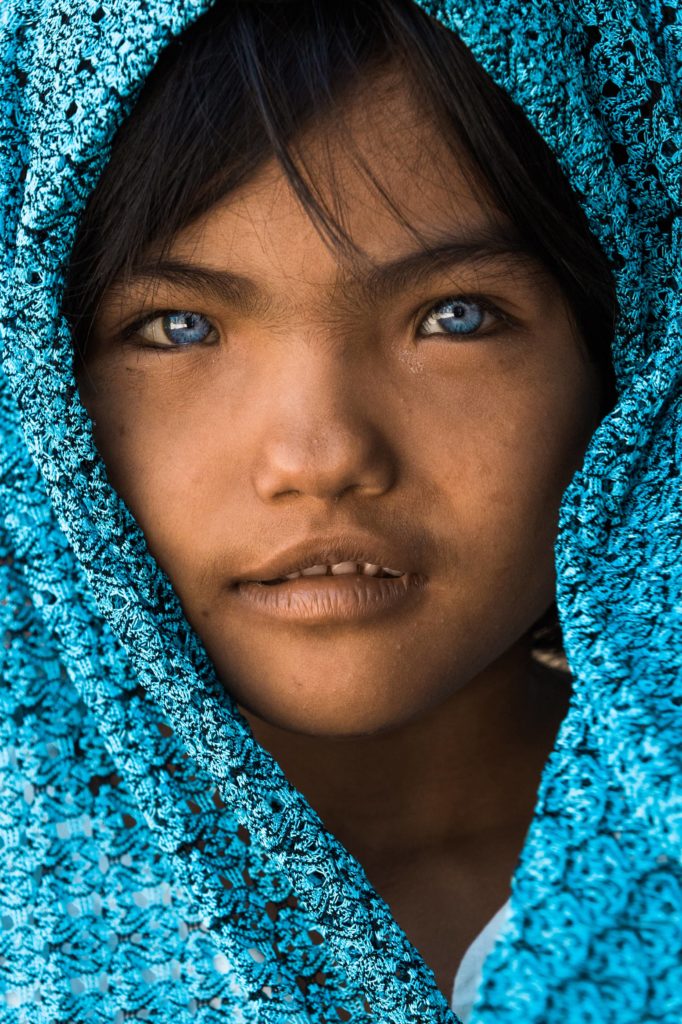 I have a special relationship with many of the tribes I’ve photographed in Vietnam. But I have a very strong bond with the family of An Phuoc, a seven year old girl with incredible blue eyes. She’s from the Cham tribe, who are specialists in making pottery and silk.

An Phuoc is known as the ‘girl with the cat’s eyes’ in her village. Her sister has one eye blue and one hazelnut.

We often hear that eyes are windows to the soul, and it’s true: eyes really can tell a story. Sapa, An Phuoc’s older sister, wanted to be a photographer, so I bought her a camera. They’re now in my ‘Giving Back’ project because the photo of An Phuoc is one of my bestselling photos. I bought a cow for the family and bikes for the girls. I visit them three times a year and I also invited them to stay in my house in Hoi An twice last year. 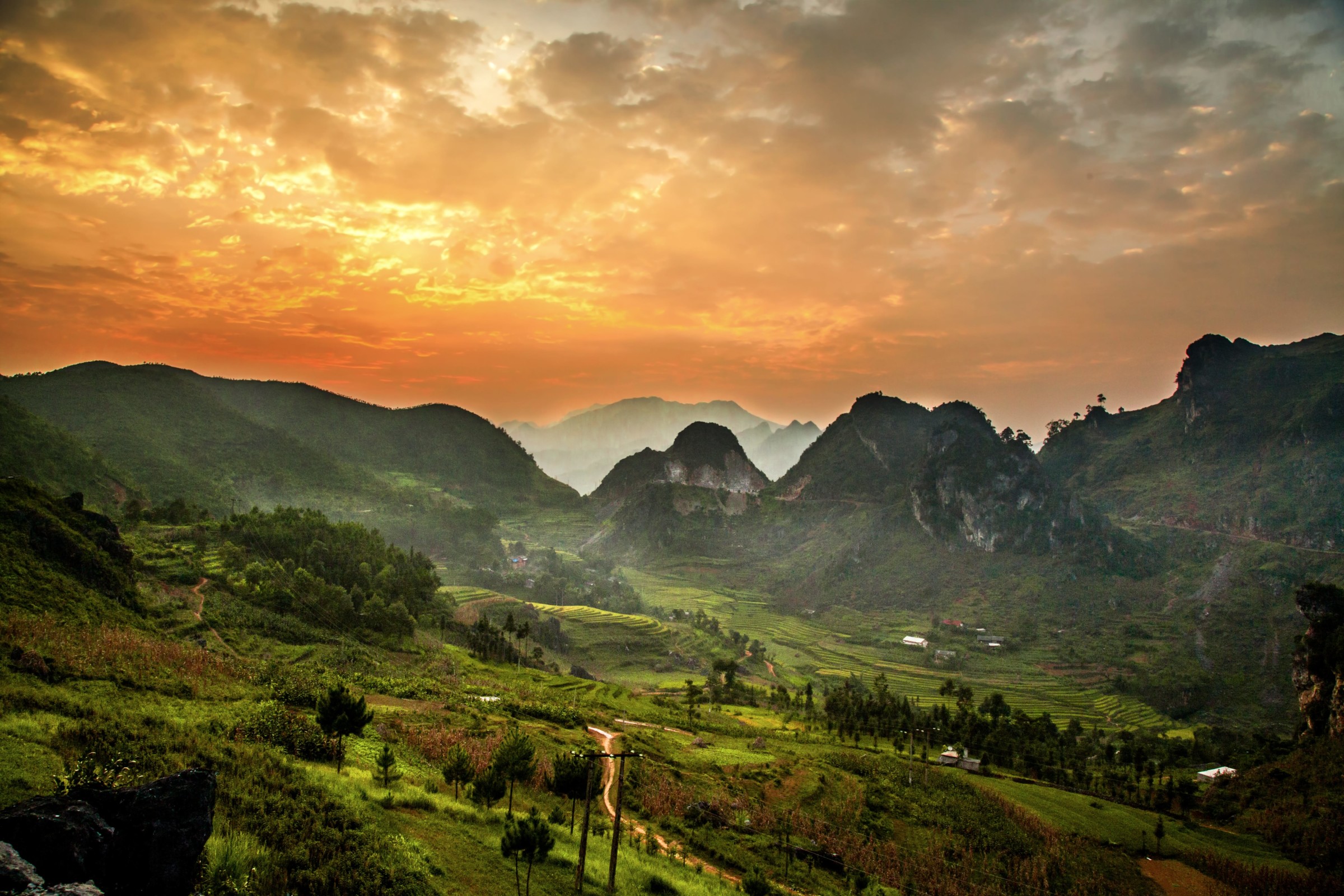 The Valley of Dong Van, in northern Vietnam, is inhabited by 14 different ethnic groups. I spent many days there to find various different tribes to photograph. It’s a peaceful place in the Mekong Delta with almost no other tourists.

The area is much less known than Sapa, which is popular with tourists for hiking and meeting local tribes. Dong Van feels more like real rural life. You can visit weekend markets and spend time in local villages. Every five kilometres, you experience different architecture and different clothing, and it feels like crossing into different countries. Some people are harvesting hemp and others are working on costumes in the front of their house, but everyone usually invites you to taste their rice alcohol.

Réhahn is currently working on a project to photograph all of Vietnam’s 54 ethnicities. As of September 2019 – several months after this interview was conducted – he has completed his mission.

Réhahn’s books include Vietnam: Mosaic of Contrasts (Vol 1 and 2) and The Collection: 10 years of photography. For more on his photography, the Precious Heritage project and other projects, his museums or for prints of his work, visit his website. He also has a Giving Back project, where he gives something back to the people he photographs. Follow him on Facebook and Instagram.