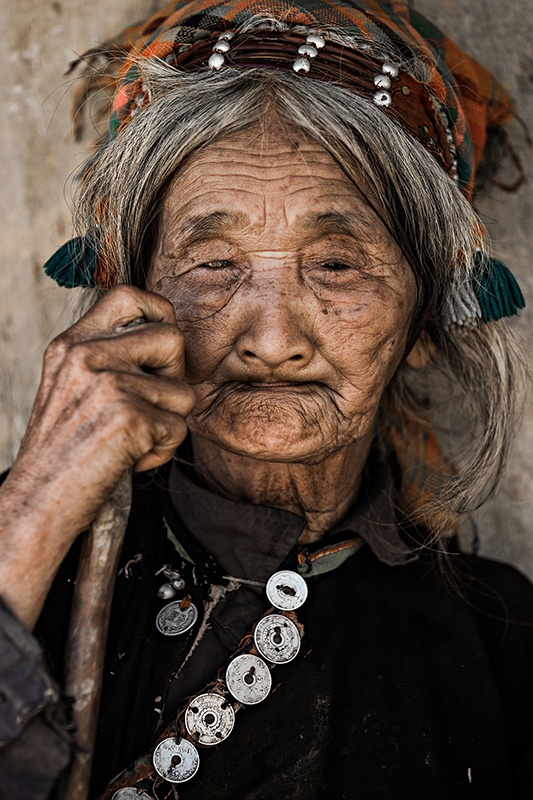 French photographer Réhahn is currently working on an ambitious, eight-year project to photograph all 54 of Vietnam’s tribes. It’s taken years of travelling Vietnam by motorbike to explore the remote corners of the country but, with 53 tribes and just one left to find and photograph, he’s set to complete his epic mission in 2019.

Réhahn is originally from Bayeux in the French region of Normandy, but he’s lived in Vietnam since 2011, based in the coastal city of Hoi An. Known as the ‘photographer who captures the soul’ of his subjects, he’s famous for his colourful and intimate portraits from Vietnam, Cuba, Malaysia, India and beyond. Here, he selects some of the highlights of his Precious Heritage project.

“The Dao have up to nine local subgroups. Each has its own traditional costume, the different features helping to distinguish one subgroup from another, like the colour of their headscarves and the particular way of tying it. The women use indigo to dye their costumes and the batik technique to create beautiful patterns. Dao territory is made up of rice terraces and is listed as a natural national heritage. It’s absolutely breathtaking.

In September 2015, I was driving back to my hotel in Quản Bạ, when I caught a glimpse of a lady with an unfamiliar costume. When I asked her which ethnic group she belonged to, she answered “the Dao Mán”, Man being the name given by the French. That name was new to me so, intrigued, I asked if I could follow her to her village. After riding down three km of rocky road, we arrived in the pouring rain.

I was wondering how I would make it back up when I realised that almost everyone around me was wearing the traditional costume. It is now one of my favourites, and I feel grateful that I had this opportunity to capture this young girl’s portrait wearing it. Information about the Dao Mán is hard to come by, so I consider myself very lucky to have met this tiny sub-group”.

“As a photographer, I’m very curious about different cultures, ancient traditions, clothing and textiles. When I meet tribal people and photograph them, I’m sometimes given traditional costumes and other items that I collect and preserve at my Precious Heritage Museum in Hoi An.

Meeting the Ro Mam was an intense and memorable experience, especially as I’d had to wait three years for authorisation. There are now only 12 of their traditional costumes left, and I was honoured to be given one, as well as a pipe and a basket, to showcase their culture at my museum. The remaining 11 white costumes are kept safely by the Ro Mam as treasures, as they know no one makes them anymore”.

“I travelled to meet the Brâu back in May 2016. It took me two days to get to their village, which was one of the poorest I’ve seen. Traditionally, the Brâu wear heavy jewellery that strains their ears to create large and long, hanging earlobes. Depending on their level of income, they use either ivory or wood.

According to Brâu tradition, as young people reach the age of puberty, they have the four front teeth of their upper jaw evenly filed. It’s considered a coming of age ritual for them. No one in the village makes their traditional costume anymore”.

“La Hủ is said to mean ‘as powerful as a tiger’ and they were known to be very skilled tiger hunters. The La Hủ has no written language and most of them don’t speak Vietnamese, which lead us to call for the help of a young local interpreter when I met them. Legend has it that a group of scholars once wrote the ancient language on rice cakes, but the language disappeared when the scholars became hungry and ate them”.

“I met A Dip, who is 76 years old, in 2017, around 50 kilometres from Kon Tum in the mountains. He belongs to the To Dra ethnic group, which is, according to the experts, a subgroup of the Xo Dang ethnic group, even though, according to the To Dra, their traditions and their dialect are different. He is the only artisan in the village who still makes a traditional bamboo basket and the last one to play the traditional instruments of the To Dra people”.

“In July 2016, I was privileged to meet the smallest ethnic group in Vietnam. With virtually no information available online, it took me two days to find them. I was lucky enough to meet the chief who was initially reluctant to part with a costume. But when I told him about representing his group in my collection, he helped me. I was surprised to discover that the Ơ Đu only have five complete original costumes left”.

Réhahn’s books include Vietnam: Mosaic of Contrasts (Vol 1 and 2) and The Collection: 10 years of photography. For more information, visit rehahnphotographer.com, follow him on Facebook and Instagram, or head to his Giving Back project.

Get off the beaten track and get a window into minority culture in Vietnam on our Northern Star Fully Tailored Journey, or explore the country with the help of a tour leader on our Highlights of Vietnam Small Group Tour. Get in touch with our team of Southeast Asia experts for more information.