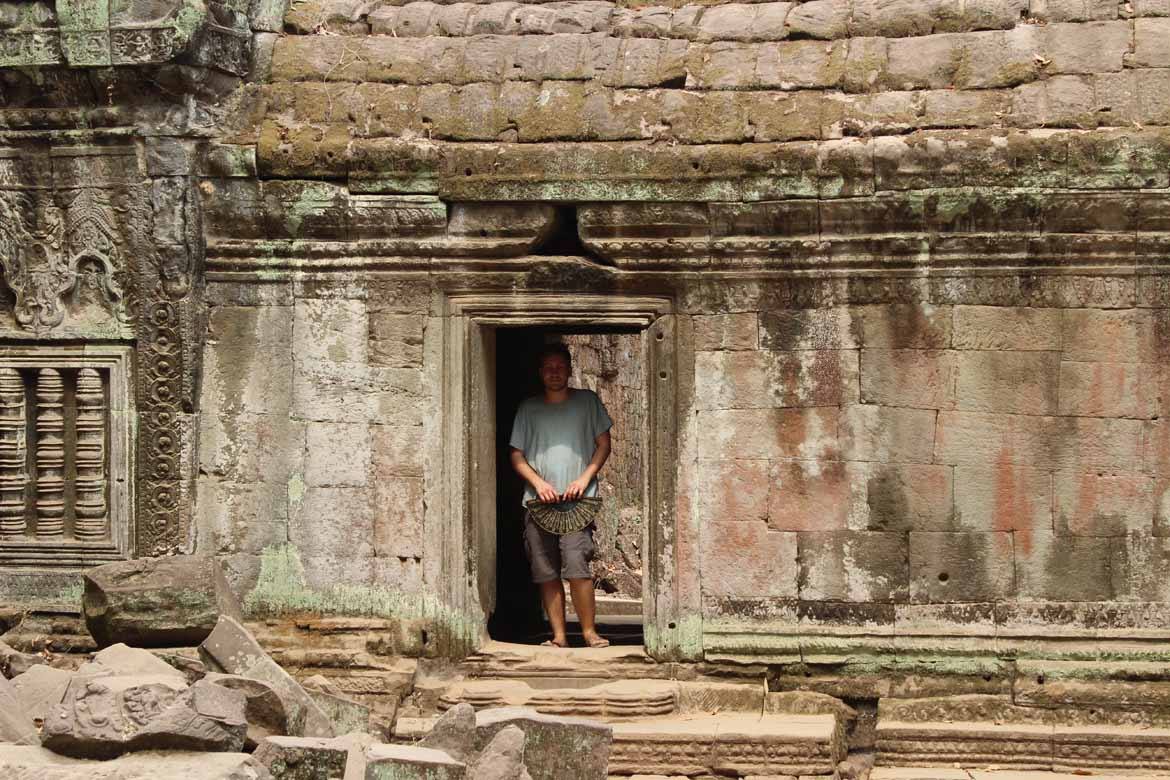 The archaeological complex of Angkor encompasses a huge number of structures. When you consider that the majority of visitors to Cambodia stop here for just a couple of days – three or four at best – it is completely impossible to see them all, and to attempt to do so would inevitably result in that dreaded tourist affliction: temple fatigue. With such an archaeological treasure trove at your fingertips, the question is, where should you go?

As you might have guessed from the title of this blog post, today I’ll be extolling the virtues of Ta Prohm: one of the most popular of all the Angkor temples.

While Angkor Wat, the jewel in the region’s crown, stands today in a remarkable state of repair – Ta Prohm, just a few hundred metres away, is quite another story altogether. Here, the jungle has crept in on all fronts: appropriately named strangler figs sprout from gallery roofs, their worm-like tendrils burrowing between the brickwork. Thick roots squeeze apart limestone slabs, while trees tower above and vines cling to the masonry.

It’s no wonder it was chosen as the set for the 2001 film Tomb Raider: It is the perfect image of an ancient ruin being devoured by the forest, and undeniably one of the most atmospheric sites in the whole archaeological park.

The temples of Angkor were built over hundreds of years, during the Khmer Empire. It’s thought that Jayavarman VII, the great builder king, was responsible for Ta Prohm – which was constructed in 1186 AD.

Ta Prohm was at that time known as Rajavihara, or “Monastery of the King”, and was built to honour Jayavarman’s family – with the central image, the personification of wisdom, modelled on the king’s mother. Other parts of the temple are dedicated to the king’s brother and his guru, and it’s thought that the whole was intended to form a pair with the temple of Preah Khan, where the central image (the Bodhisvatta of compassion) was modelled on Jayavarman’s father.

At one time, the site was home to 12,500 people – including 18 high priests and 615 Apsara dancers – and provided services to over 800,000 people living in surrounding villages. After the fall of the Khmer Empire, however, Ta Prohm was abandoned and left to rack and ruin for hundreds of years.

When Ta Prohm was “discovered” by the French in the late 19th century, would-be restorers agreed that it would be a shame to try to disentangle the temple from its jungle surroundings. With the buildings and trees now so interdependent, conservationists focussed their efforts instead on preserving Ta Prohm in its half-devoured state, reconstructing and stabilising some parts while leaving others as they were.

The result is a wonderful compromise: it is possible to get a sense of what the structure might have been like in its heyday, but the impressive, snake-like roots of the jungle have been preserved.

If you would like to visit Ta Prohm – or any other temple – on your trip to Cambodia, don’t hesitate to get in touch with one of our excellent travel consultants, who would be happy to begin planning your trip today. Or Vietnam & Cambodia Uncovered tour is a fantastic place to start!