Skip to content
Thank you for signing up!
Subscribe to our Newsletter
HOME » Blog » Destination profile: Golden Rock

Located in the Eastern Yoma Mountains at the point where Mon State meets Bago State, the Golden Rock is almost unbelievable. Balanced precariously on the edge of a cliff, with just a tiny footprint actually touching the rock, this huge 7.6-metre boulder appears perpetually on the point of rolling off its perch and into the valley below.

Given its extreme location, it’s not hard to understand how the Golden Rock has become one of Burma’s most sacred pilgrimage sites – coated in gold by thousands of devotees who come from miles around to pay their respects. More recently, pilgrims have been joined by a growing number of tourists, who come to appreciate the peaceful atmosphere and stunning views – especially at sunrise and sunset, when chanting fills the air and the rock glows with the reflected colours of the changing sky.

The Golden Rock is located in southern Burma, close to the border between Mon State and Bago State (at the top of the thin strip of country that extends southwards along the Thailand’s western edge).

A vast, gold-covered, pagoda-crowned, granite boulder balancing on the edge of a cliff.

When was it built?

Nobody knows how long the Golden Rock has stood on its ledge, but legend has it that it was placed there during the time of the Buddha.

Again, nobody truly knows – but according to legend the rock was positioned and the pagoda built by an ancient Burmese king with the help of Thagyamin, the king of the nats.

How big is it? 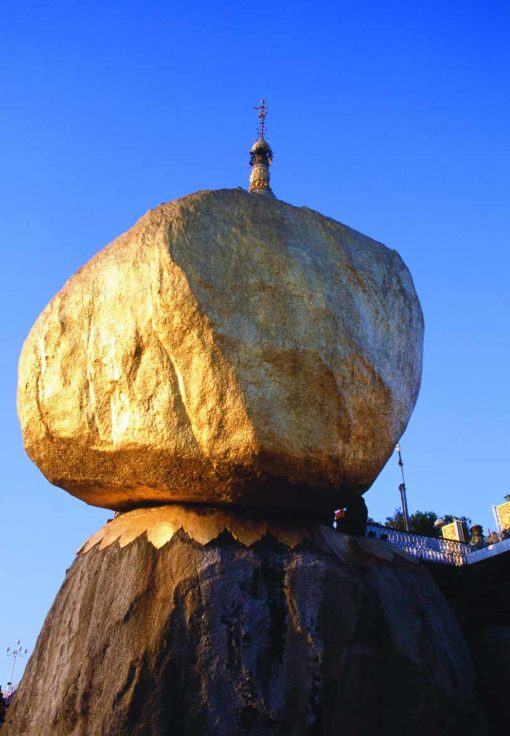 Not much is known about the history of the Golden Rock – which has stood in its precarious position for as long as records exist. What little information does exist is shrouded in legend, and it is virtually impossible to separate fact from myth.

Legend has it that the Buddha, on one of many visits to the area, gave a strand of his hair to the hermit Taik Tha. The hermit in turn presented the hair to the king, who (with supernatural powers inherited from his alchemist father and dragon princess mother) promptly sought out a huge boulder from the bottom of the sea and placed it on top of the hair, in its current position 1,100 metres above the surrounding hills. On top of the rock, he built Kyaiktiyo Pagoda, the stupa that travellers see today.

The legend claims that it is the Buddha’s hair that prevents the Golden Rock from tumbling down from its precipice – and the contact area between boulder and clifftop is so unbelievably small that it’s easy to believe magic could be at work.

Interestingly, the Golden Rock’s famous golden colour is a relatively recent development in its history. Early photographs of the rock show its original, dark granite colour, but in the past hundred years or so the Burmese practice of sticking gold leaf on and everything of religious significance has turned the entire boulder a vast, gleaming nugget. Male worshippers still apply gold leaf to the rock today as a mark of devotion, but women are unfortunately barred from even approaching it. 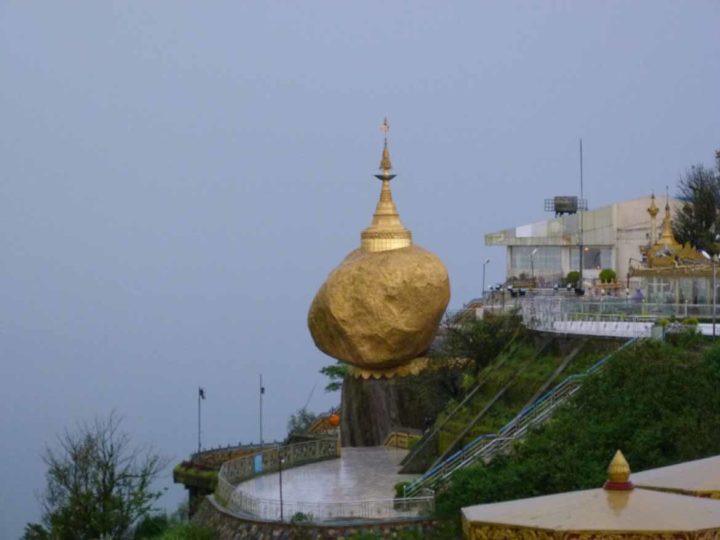 These days, the Golden Rock is surrounded by a complex of monasteries and shrines, with viewing platforms and connecting walkways – but besides this there is little development in the pilgrimage site’s immediate vicinity. A little further down the mountain, about a quarter of a mile from the rock itself, there is a small collection of hotels and restaurants built to accommodate the many pilgrims who flock to see this sacred site. Then, about another mile back down the road, there is a slightly larger collection of accommodation and restaurants.

Visitors should be aware that although hotels surrounding the Golden Rock are used to catering to foreign tourists due to the large numbers of international pilgrims who visit the site, this is a sacred site first and foremost – not a tourist attraction. Accommodation is geared toward pilgrims, and is mostly very basic.

The only way to visit the Golden Rock is by road, and the journey takes around five hours from Yangon – so we would always recommend spending the night rather than attempting a day trip. Apart from anything else, you don’t want to miss seeing the rock at sunrise and sunset, when it is at its most atmospheric and beautiful!

Once you reach the mountain, your vehicle will leave you at a small village around three to four miles from the summit. Some visitors opt to spend the night here, but we recommend heading further up for your night at the rock. The only way to do this is by jumping aboard one of the local open-topped trucks for a rather white-knuckled ride up the winding mountain roads! We recommend spending the night at the very top of the mountain, to be within short walking distance of the rock itself.

If you’re interested in including a visit to the Golden Rock in your next trip, take a look at our Kipling’s Burma itinerary for inspiration – or get in touch with one of our experts to plan your own bespoke trip now.