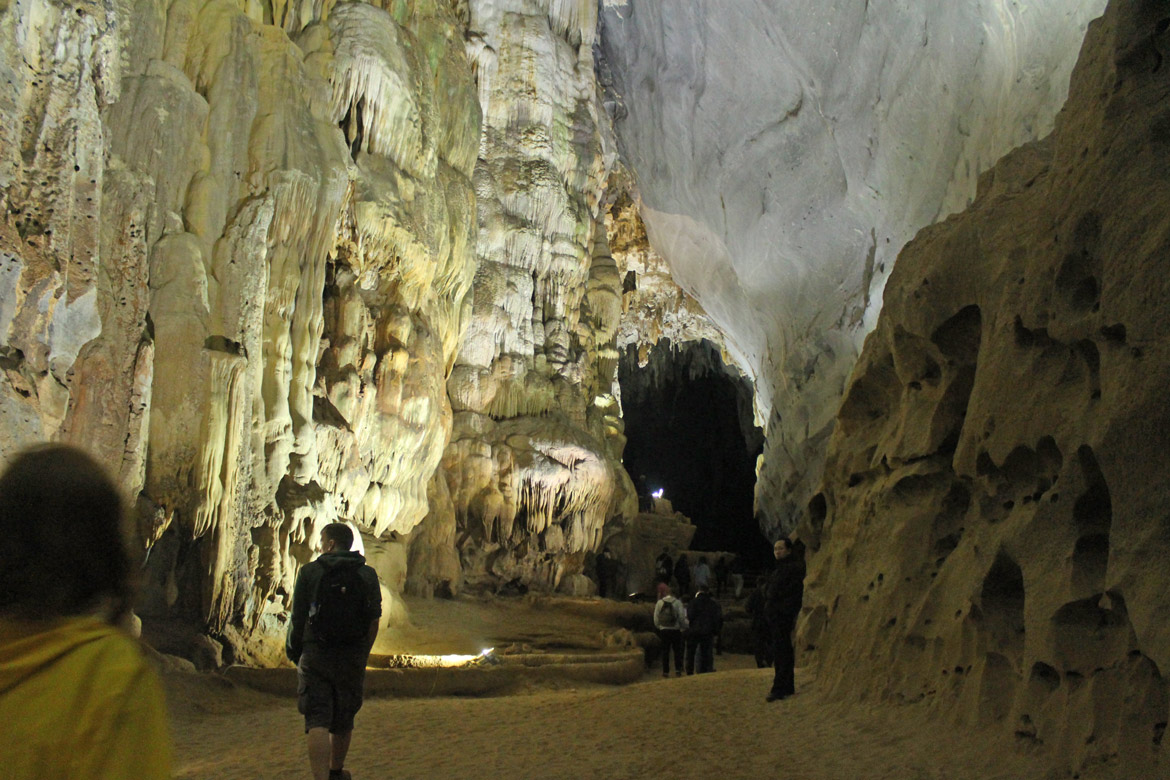 In praise of Phong Nha Cave

Violet recently returned from an Inside Vietnam Tours trip through Cambodia, Laos and Vietnam with her family. They spent three nights in Phong Nha National Park, where they visited several of the region’s spectacular limestone caves.

If you’re an avid reader of our blog, you might remember my post about the caves of Phong Nha National Park back in January. Since then, I’ve had the very good fortune to have visited a few of them, and I am pleased to report that they absolutely lived up to my expectations – so much so that Phong Nha swiftly became my new favourite place in Vietnam. Over the course of the next few weeks and months I will no doubt be regaling you with many a tale of my adventures in the caves, but for today I will be singing the praises of Phong Nha Cave: one of the unexpected highlights of my trip.

As you may recall, I mentioned in my first post that Phong Nha Cave – once the toast of the town and the national park’s biggest attraction – has been playing second fiddle for quite a while now to its neighbours: Son Doong Cave (the largest in the world, discovered in 2009) and nearby Paradise Cave (widely considered the most beautiful in the region, discovered in 2005). Unfortunately I didn’t have the privilege of visiting Son Doong (my family weren’t prepared to fork out the £16,000 it would have cost to get all eight of us there, the cheapskates) but I did visit both Paradise Cave and Phong Nha Cave, which are very close together and easily combined into a day trip.

Now, this is just a personal opinion – feel free to disagree with me – but as glorious as Paradise Cave is, I actually prefer Phong Nha. Yes – the overlooked, the underrated, the unappreciated Phong Nha Cave, which I had been all prepared to be underwhelmed by, was actually really, really cool.

I prefer Phong Nha to Paradise for several reasons. First of all, in terms of spectacular stalagmites and stalactites Paradise Cave takes the biscuit – but the ones in Phong Nha Cave aren’t piffling by any stretch of the imagination. They’re immense. There aren’t as many of them as in Paradise Cave and perhaps they aren’t quite as big, but I was pleasantly surprised by just how impressive they were.

Another difference between the caves is the mode of transportation. To visit Paradise Cave, you enter through a small opening and proceed via a series of wooden walkways. In Phong Nha Cave, meanwhile, you enter the cave by river on a small narrow boat, heading to the end of the navigable passage before returning and disembarking on a subterranean beach, where you can wander about on the sand and follow another passage on foot back to the entrance. Though the arrangement in Paradise Cave is more conservation friendly (Phong Nha Cave has been criticized for allowing tourists to roam unchecked all over the shop, damaging and wearing away rock formations), I enjoyed the Phong Nha experience more for having the freedom to wander about without obvious man-made structures in my path. I’m not suggesting that future caves should necessarily be done this way, but from a purely selfish perspective I found it much more atmospheric.

Both caves are very easily accessible, which does mean that both are very busy with tourists – especially at peak times. I found that in Paradise Cave this marred my experience rather more, as people have the freedom to stand around taking photos and getting in the way for as long as they wish – instead of being conveniently confined to their vessels as in Phong Nha Cave. It is the noise that comes with the tourists that bothers me most, however – and this was undoubtedly worse in Paradise Cave, with its guides and their megaphones, its yelling visitors (there is always at least one middle-aged Vietnamese woman yelling in my ear at these places), and its cacophony of circular saws and hammers (yep, didn’t expect to find those in the middle of Paradise Cave, but there they were).

In Phong Nha Cave, by contrast, I found a brief moment of peace – a rare thing in naturally garrulous Vietnam. Perhaps it’s because the boats switch off their engines as they enter the cave, bringing about a sudden hush in their passengers, but the atmosphere here seems altogether quieter and more reflective than in Paradise Cave, allowing me to enjoy the spectacle in my preferred manner: peace and quiet.

I’m not suggesting that you skip out Paradise Cave in favour of Phong Nha – and you’d be silly to do so when they’re so easily combined as a day trip. I only suggest that you give Phong Nha the appreciation it’s due – because it’s not always about being the biggest and the best!

Get in touch with one of our Vietnam experts if you’re interested in adding a visit to Phong Nha and Paradise Cave to your next trip. A visit to Phong Nha is also included with some of the country’s more famous, ‘must-see’ places on the ‘Highlights of Vietnam’ tour.