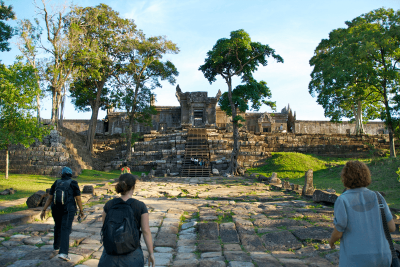 Most travellers to Southeast Asia will never have heard the name Preah Vihear, so it may come as some surprise to hear that, along with Angkor Wat, the obscure northern temple is one of Cambodia’s two World Heritage Sites. Of course, for anyone who read our recent post, World Heritage Indochina, it will come as no surprise at all.

Playing second fiddle to somewhere as grand and iconic as the temples of Angkor is never going to be easy, but there is another reason that Preah Vihear might have slipped under your radar until now – at least if you’re a Brit.

Up until the beginning of this month, Britain’s FCO (Foreign & Commonwealth Office) officially advised against travel to the Preah Vihear temple area and the Ta Krabey/Ta Moan temple area – both of which lie on the border between Cambodia and Thailand. Though a border dispute which began in 2008 and had concluded by around 2011 led to some localised volatility, it has been several years since the region has presented any real risk to travellers, and so the decision to remove the travel advisory has been universally welcomed.

So why bother visiting Preah Vihear at all when you could settle for the incredible temples of Angkor?

There are really two key reasons, both of which make Preah Vihear an attractive addition to your Cambodian itinerary. The first is that while the temples of Angkor (and especially the pièce de resistance, Angkor Wat itself) are undeniably, incomparably spectacular – but they are also incredibly popular, which means that you will inevitably be sharing them with hordes of other tourists. Preah Vihear, meanwhile, is much more remote and very rarely visited – meaning that it has an atmospheric quality that can be lost at the more popular temples.

Another reason to give consideration to Preah Vihear is its objective beauty and remarkable preservation. No other temple in Cambodia (or indeed throughout Indochina) can boast a view as spectacular, stretching out for miles across the surrounding plains, and the architecture itself is very impressive – if not quite as grand as that of Angkor Wat.

There are numerous ways to incorporate Preah Vihear into a longer Cambodian trip. Though it is just about possible to do the temple as a day-trip from Siem Reap (the road between the two destinations is good, and the journey takes around three hours), we generally recommend planning to spend at least one night in the vicinity of Preah Vihear as it is quite a long way to go for the day.

En route to Preah Vihear from Siem Reap, you might like to incorporate the beautiful and overgrown temple of Beng Mealea, the relatively unknown yet amazing temple of Koh Ker, or Anlong Veng – the final refuge of Pol Pot and the Khmer Rouge.

Where? A surprisingly vexed question! Located on the border between Cambodia and Thailand, Preah Vihear has been at the centre of heated disputes between the two countries, both of which claim sovereignty over the region. The dispute was settled in 2011, and Preah Vihear remains the property of Cambodia as per the 1962 ruling by an International Court of Justice.

What? Preah Vihear (or Prasat Preah Vihear) is a Hindu temple built at the top of a 525-metre (1,722 ft) hill overlooking the surrounding plains in both Thailand and Cambodia. In 2008 the temple was inscribed by UNESCO, joining the Angkor complex to become Cambodia’s second World Heritage Site.

When was it built? The temple was built during the Khmer Empire, with construction beginning as early as the ninth century. Successive kings each added their own adjustments to the temple, and later generations repurposed the site to Buddhist use after the decline of Hinduism in the region.

Who built it? It’s thought that most of the surviving temple was built during the reigns of the Khmer kings Suryavarman I and II.

How big is it? Preah Vihear is unusual amongst Hindu temples in that it was built along a north-south axis rather than being orientated toward the east in the traditional fashion. The complex itself is 800 metres long (2,600 ft).