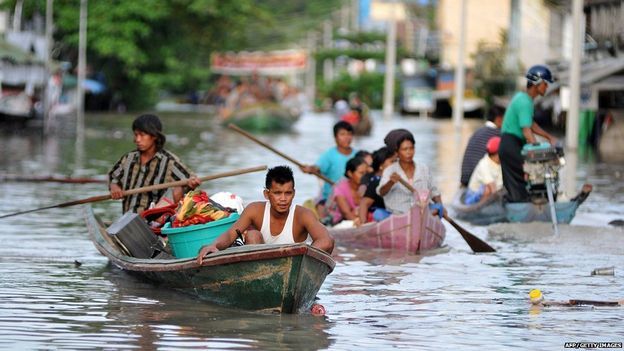 Severe flooding hits Burma: What you need to know

Burma experiences a rainy season between the months of June and September every year, but occasionally a particularly heavy monsoon can lead to severe flooding – sweeping away homes, damaging infrastructure, and triggering deadly landslides. This, unfortunately, is exactly what has happened this year.

After a month of heavy rain throughout July, Burma and its neighbours were already experiencing flooding when Cyclone Komen made landfall on the coast of Bangladesh on Thursday 30th of July. The situation worsened as the cyclone made its way across Bangladesh and into India, bringing heavy wind and rain to the surrounding region – including Burma.

As a result, Burma is now experiencing severe flooding, resulting in at least 27 deaths and some 156,000 displaced (according to the UN). This number is expected to rise as rescue efforts make their way to the country’s remoter regions, which have thus far been inaccessible due to a combination of landslides, flooding and continuing heavy weather.

Which areas have been affected?

Burma, India, Bangladesh, Pakistan, Vietnam and Nepal have thus far been the countries worst affected by flooding. Within Burma, President Thein Sein has declared the Sagaing and Magwe regions and Chin and Rakhine states disaster zones.

Amongst these four areas, Rakhine State is thought to have been particularly badly hit – with over 100,000 vulnerable Rohingya Muslims already living in poorly built camps due to ongoing conflict in the area. There have also been worrying reports that Rohingya have been turned away by Burmese security forces from monasteries and temples where people are sheltering from the effects of the weather.

For now, it’s thought that Burma and its neighbours will continue to see heavy rains for at least the next few days. The monsoon season often doesn’t peter out until the beginning of September, so there will be some risk of bad weather for several weeks – though there is hope that the worst is now over.

The long-term effects of the flooding, however, will be difficult to fix. Tens of thousands of people have been left homeless, roads and bridges have been swept away, and half a million acres of rice paddies have been flooded – damaging valuable crops. Affected areas may remain inaccessible to rescue efforts or supplies for some time, and will likely see a rise in the spread of disease coupled with a reduced capacity to cope with medical emergencies.

How can I help?

Various charities and organisations are rushing to provide aid to the victims of flooding in Burma.

Here at InsideAsia Tours, we have set up a Just Giving page to support the Red Cross, who are currently providing aid to affected areas of Burma. We will be beginning our charity fundraising with a company bake-off, but we welcome donations from any source. Just follow this link to make a donation:

Is it safe to travel?

At the moment, UK government travel advice directs travellers to “exercise caution and follow the advice of the local authorities” if travelling to the Chin, Rakhine, Sagaing and Magwe regions. If you are planning to visit these areas, we recommend making alternative arrangements in other, safer parts of Burma.

If you are planning to travel to parts of Burma not affected by the floods, we do not recommend that you cancel your travel arrangements. In such times of crisis, the income provided by tourism is more important than ever, so by keeping to your plans you will be providing much-needed support to the communities you visit. This is something that we learned first-hand in the aftermath of the 2011 tsunami in Japan. As communities began to rebuild, we found that our efforts to bring tourism back to the affected areas was vastly appreciated by those struggling to keep their businesses afloat.

Follow the link below to see up-to-date travel information for Burma:

If you are an InsideBurma Tours customer and worried about your upcoming trip, please don’t hesitate to get in touch. We are in constant contact with our partners on the ground in Burma, and will be able to provide up-to-date advice on the situation and how it is likely to affect your plans. You can get in touch with us at; [email protected]