Skip to content
Thank you for signing up!
Subscribe to our Newsletter
HOME » Blog » New traffic restrictions make for a safer, cleaner Saigon 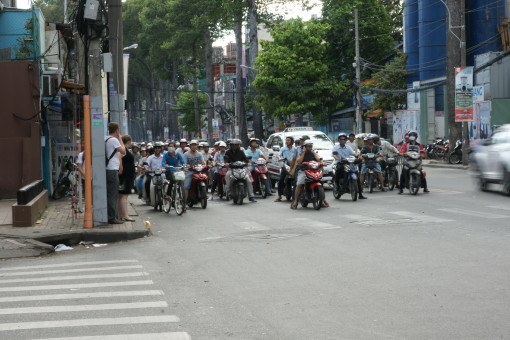 There may be nine million bicycles in Beijing (if Katie Melua is to be believed), but according to Thanh Nien News reporting last week, there are six million motorbikes and over 500,000 cars in Saigon: an altogether more troubling prospect.

Whether or not these estimates are to be trusted is up for debate, but whatever you believe – anybody who has visited Ho Chi Minh City before will agree is that there are a heck of a lot of scooters in Saigon.

It is perhaps the first thing to strike you (hopefully not literally) when you arrive in the city: swarms of noisy, single-cylinder mopeds buzzing through every gap in the traffic and filling up every available space, often carrying several people and five times their weight in crates, bags and a miscellany of other barely believable cargo. There is almost room for nothing else – and woe betide the bewildered tourist trying to cross the road!

Thankfully, it seems that the powers that be in Ho Chi Minh City have finally decided to do something about the problem. Last week, Thanh Nien News reported that the HCMC Department of Transport is planning to limit personal vehicles in the city by raising consumption tariffs, implementing new “environmental fees”, and introducing an annual quota on newly licensed vehicles. This new quota will mean that aspiring vehicle owners must bid to buy a new motorbike (or car, for that matter), pay an additional sum in order to drive it, and have their own parking space in which to keep it. The plan would also mean that certain vehicles would only be allowed to drive on the streets at certain times of day.

Though the move is certainly good news in terms of curbing the growth of the problem, it will not cut down on the current number of bikes and cars on the streets of Saigon. What with current public transport systems being exceedingly slow and stigmatised by many as an option only for Saigon’s very poorest; it seems likely that it will not be until the eventual arrival of the HCMC metro (whose construction began in 2010, with initial services expected to begin running in 2017) that we might begin to see a visible improvement in congestion.

Although the traffic is ‘part of the experience’ for some visitng the country for the first time, these new restrictions will be a step in the right direction and an exciting change for Vietnam’s biggest city….hope it doesn’t change our Vespa night tours of the city too much though…